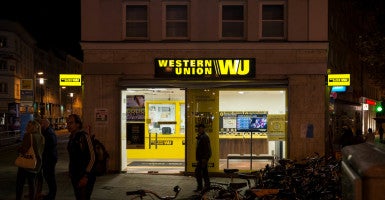 Formal money transfer providers such as Western Union are regulated, but people sometimes use services that do not receive oversight, making it hard to track the amount of remittances from the United States. (Photo: iStockphoto)

Two recent reports by the federal government’s watchdog shed light on one of the more overlooked elements of immigration to the United States: the money migrants send to the country from which they came.

The U.S. is the largest source of these money transfers sent overseas by foreign-born residents, known as remittances, with an estimated $54.2 billion sent from this country in 2014, according to the World Bank. The World Bank has estimated that remittance outflows will reach $586 billion in 2015 and grow another 4.1 percent in 2016.

While developing countries such as Mexico, India, and the Philippines have come to depend on these funds as a steady source of incoming money, and a boon to their economies, some politicians are seeking to limit remittances as a way to discourage illegal immigration and to punish people already living here illegally who seek to send their wages to family overseas.

“Cracking down on illegal immigration is clearly a major issue in the presidential race, and a lot of Americans are expressing that, so this a commonsense, practical way to deal with it, to really dissuade folks from being here illegally and to capture that revenue and put it towards border enforcement,” Vitter told The Daily Signal in an interview.

Under the legislation, people who can’t prove they are here legally would be fined an amount equal to seven percent of the value they are transferring, excluding fees that are already applied for users of remitting services.

The money from those fines would go to the Consumer Financial Protection Bureau to help it pick up the costs of enforcing the legislation, and any leftover funds would be sent to U.S. Customs and Border Protection to help the agency secure the border.

Vitter and Price asked the Government Accountability Office to conduct investigations into the scope of remittances in the U.S. and how the lawmakers’ proposed legislation would impact the amount of money flowing out of the country.

In seeking these answers, the government watchdog learned something else: that existing data regarding remittances is unreliable and that much remains unknown about the methods migrants are using to transfer money.

For one, the GAO discovered that the agency responsible for collecting data on remittances, the Bureau of Economic Analysis, isn’t very good at it.

The GAO faults the Bureau of Economic Analysis for failing to use proper methodology in capturing the data, leading to missing information and measurement problems and lacking transparency in explaining how it collects the numbers.

This inaccurate data is a problem, the GAO says, because the World Bank and other international and national agencies rely on the numbers in releasing their own data.

Another challenge with tracking the scope of money sent overseas is that while most remittances are thought to be sent through formal channels such as banks, credit unions, and wire and postal services that are regulated by the federal government, some is transferred using informal services, without oversight.

One of these unregulated systems, known as hawala, has been the subject of recent attention in the media because of its use by people fleeing war-torn Middle East countries for Europe.

Hawala enables users to transfer money from one point to another without either side having a bank account, thus leaving no paper trail and operating outside the law.

Cuevas-Mohr, in an interview with The Daily Signal, said the best data comes from the major banks in the receiving countries and that some countries, such as Mexico, are better at it than others.

“There are not very good channels of getting that information,” Cuevas-Mohr said. “So the numbers don’t mean much because they are a small percentage of what is really being remitted.”

In one of its reports, released this month, the GAO speculated that imposing a fine on remittances against people without legal status could encourage them to send money home using unregulated services such as hawala rather than going through traditional methods. People using the informal services could not be subjected to the fines because there’s no way to enforce them.

So if more people choose to remit using unenforced systems, the revenue generated from the fines would be minimal, the GAO predicts.

In addition, the GAO reports that it’s difficult to know how many migrants use regulated methods to transfer money home, and how many go around them, so limited information exists about the immigration status of those who are currently remitting.

Cuevas-Mohr believes that the potential revenue from imposing a fine would not be worth the lost information about the industry that would come from people using unregulated means to transfer money.

“When you make it more difficult for those transfers to take place, then the market becomes less transparent—there are so many ways you can move money,” Cuevas-Mohr said. “You can have relatives that live in the U.S. legally and then visit their home country and take the money for you. I always tell regulators that if we open the door for everybody to remit, and make it easy to send money overseas, it will allow law enforcement to be able to see what is really happening.”

In a separate report prepared for Vitter and Price, the GAO found that the large number of remittance transactions in the U.S., and the various ways in which people can send money home mean that the industry is ripe for fraud.

Remittance providers have to report only suspicious transactions and create records of transfers equal to $3,000 or more.

The GAO learned that it’s easy for people to avoid this requirement by using structuring, where they divvy payments in smaller amounts to avoid reporting.

“Federal agencies and international organizations have identified instances where remittances have been used to launder proceeds from illicit activities such as drug trafficking, human smuggling and trafficking, and consumer fraud,” GAO wrote.

Still, most remitted money is coming from migrants who want to support their families, Cuevas-Mohr said, in increments so small that there’s no reason for them to be tracked for fraud.

“Most of these transfers are very small and repetitive,” Cuevas-Mohr said. “If you live in the U.S. and are sending money to your mother—I am talking $50 or $100—you send it almost every week or two weeks.”

Cuevas-Mohr acknowledges that most people in the country illegally are likely remitting money if they can, but as they are here longer and become embedded in the country, they are less likely to remit.

He contends that creating hurdles to remit will inspire more illegal immigration.

“If you decide that Mexicans who come here illegally should not be able to send money home, what about the sons or mothers who stayed in Mexico and can’t receive that money? They are going to try to come to the U.S., too,” Cuevas-Mohr said. “Why would we try to collect fines from people at the lowest echelon of society, make it harder for them, and push them to migrate because they are not getting the support from a family member to stay in their home country?”

Vitter, meanwhile, argues that while it’s tough to understand illegal immigrants’ contribution to remittances, the move to discourage them from doing so is a matter of fairness.

“Anything where you are trying to track activity by illegal immigrants will be somewhat hazy by definition, but with this, they are clearly contributing to a major activity [remittances], and we should discourage them from sending billions out of the U.S. now and in the future,” Vitter said.