Should Wisconsin Pass a Right-to-Work Law? These 2 Charts Explain the Debate. 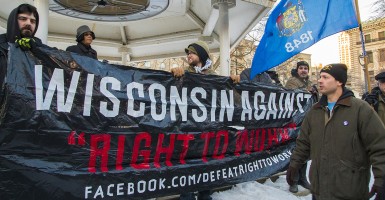 Some Wisconsinites are pushing for a right-to-work bill in their state capitol this week, in hopes to have their state join 24 others in making union dues voluntary.

Though union membership rates have steadily dropped since the 1950s, the bill is drawing a heated debate. Tuesday morning, supporters and opponents of right-to-work laws testified before the Senate Committee on Labor and Government Reform in Madison, Wis. for eight hours. More than 1,800 union supporters flooded the chamber hallways with chants of “Hey-hey, ho-ho, right-to-work has got to go.”

“Union membership has declined because many workers see little value from union representation,” James Sherk, a senior policy analyst in labor economics at The Heritage Foundation, told The Daily Signal.

But opponents of the Wisconsin bill say workers’ “wellbeing and livelihood is jeopardized” by right-to-work laws.

“This proposed legislation unfairly risks the health and safety of employees by depriving them of on-the-job protections that unions have historically defended,” executive director of the NFL Players Association, DeMaurice Smith, said in a statement released for the hearing.

A Gallup poll shows widespread support for right-to-work laws, even among Democrats. The Wisconsin legislation is aimed at private-sector workers.

“Americans of all political stripes overwhelmingly believe that no one should be forced to associate with or financially support a private organization against their will,” Sherk told The Daily Signal.

Sherk was one of the experts who testified in support of the law.

“Right-to-work laws are economically beneficial,” Sherk said. “Wisconsin has fallen behind and this would slow or even reverse that trend.”

After the state Senate passed the bill this week, the state Assembly is expected to take up the measure next week.

Gov. Scott Walker, a presumed Republican presidential candidate in 2016, has said he will sign the bill into law.