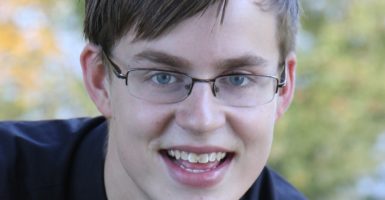 “It didn't seem particularly feasible to try to go to a private school that we were hoping to go to without getting some sort of financial support,” Harvard freshman Elisha Doerr says. (Photo: Daniel Reinhardt/Picture Alliance/Getty Images)

Elisha Doerr would not have had an opportunity to attend Wisconsin Lutheran High School, a Milwaukee-based private boarding school, if it weren’t for a school choice program.

The school’s excellent curricula and the religious community were valuable to Doerr, 18, who now attends Harvard University and is deciding between majoring in government or computer science.

Raised in rural Waupun, Wisconsin, with six younger siblings, Doerr’s choice for a superior education in his hometown appeared limited.

His parents, who had homeschooled Elisha, looked at Wisconsin Lutheran High School for its religious affiliation, but they needed financial assistance to send their son there.

“With there being seven kids in my family and just having gotten a mortgage on our house that we just moved into,” Doerr said in an interview with The Daily Signal, “it didn’t seem particularly feasible to try to go to a private school that we were hoping to go to without getting some sort of financial support.”

Wisconsin Lutheran is one of 129 schools that are part of the Milwaukee Parental Choice Program, launched in 1990 to provide alternatives to troubled public schools.

The program had 28,917 participating students in kindergarten through 12th grade during the 2018-19 school year. Under the program, a school receives a state aid payment on behalf of the eligible student and parent or guardian.

Before Doerr could get into the school voucher program, his parents first had to save money in an education savings account to cover his freshman year.

Doerr’s parents saw the Milwaukee Parental Choice Program as giving them control of their son’s education. The student’s father, a Lutheran pastor, had ties to Wisconsin Lutheran and wanted his son to grow not only academically but spiritually.

Commonly referred to as the nation’s first modern school choice initiative, the Milwaukee program provides vouchers to students from lower-income families for use in attending private schools.

Doerr’s parents gained the flexibility to decide what was best for him.

Before the Doerrs’ experience, though, Milwaukee lawmakers had some disagreements in the mid-2000s about the future of the Milwaukee Parental Choice Program, which had not been analyzed since 1995.

Two researchers evaluated the Milwaukee Parental Choice Program after pitching the idea in 2007 to then-Gov. Jim Doyle, a Democrat in office from 2003 until 2011, and legislative leaders who wanted to reduce funding for the program.

The researchers were Patrick Wolf, a professor in the University of Arkansas Department of Education Reform, and Corey DeAngelis, a former student of Wolf’s who now is an education policy analyst with Cato Institute, the libertarian think tank based in Washington, D.C.

The Wisconsin lawmakers, he said, “came to a compromise” that included calling for an evaluation of the Milwaukee Parental Choice Program.

Initially, the research by Wolf and DeAngelis focused on analyzing test scores from 2007 to 2012, but “test scores are not everything that we want from a child,” Wolf said in the interview. They found the program had positive effects on reading scores and a neutral effect on math scores.

Wolf and DeAngelis decided to look beyond test scores and also evaluate school vouchers for their impact on character. The result was what Wolf and DeAngelis say is the first research report on the effect of school choice on reducing crime.

“We took a representative sample of participants in the [Milwaukee Parental Choice Program] and carefully matched them to similar Milwaukee public school students, and then tracked their outcomes over time,” Wolf said.

The study also found that 38% fewer paternity suits were filed once students reached their mid-20s. When difficulty in identifying a biological father occurs, lawsuits can be used to force child support payments.

Asked what could have contributed to the results beyond curricula, Wolf said the religious component in many private schools may have had a deep influence. Most teachers in public schools are stifled by regulations, he suggested:

It could be because of the religious environment that many of these schools foster. The majority of the schools participating in the program have a religious affiliation. And so maybe just going to school with a religion, you make it a lot easier to instill these values in the students. Public schools are limited in the values they can communicate to students.

What does Doerr think was the advantage provided by Wisconsin Lutheran High that a traditional public school could not provide?

“The interactions with the teachers, like having chapel every day and knowing that they’re of the same faith as you,” Doerr said.

Doerr said his parents valued this specific experience through the Milwaukee Parental Choice Program the most.

Although academic success helped him become a Harvard freshman, he said, he and his parents gained the power to customize his education.