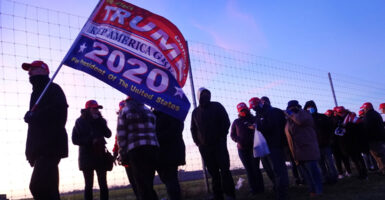 MADISON, Wis.—Six Kenosha residents have filed a complaint with the Wisconsin Elections Commission alleging the city allowed liberal outside groups to take over running November’s election.

The action is the latest in a growing number of election law complaints against the “famous WI-5”—the cities of Milwaukee, Madison, Green Bay, Kenosha, and Racine.

But unlike in Green Bay, where the city’s clerk challenged the infiltration by the outside groups and meddling city officials, emails obtained by Wisconsin Spotlight show that election officials in the other four Democratic Party strongholds were glad to go along for the well-funded ride.

The emails show how deeply entrenched the Chicago-based Center for Tech and Civic Life’s network of left-wing “partners” was in administering elections in the five Wisconsin cities—and how partisan the activists were.

They allege that the city violated the U.S. Constitution’s elections and electors clauses by signing contracts with third-party groups that allowed those groups to take over large facets of election administration.

Residents of Green Bay and Racine have filed similar complaints.

“You are the famous WI-5. Congrats on successful administration of last week’s state primary!” Whitney May, Center for Tech and Civic Life’s director of government services, wrote to local election officials in the five cities after the statewide primary elections in August. “Excited to see November be an even bigger success for you and your teams.”

With November in mind, May wanted to connect the election officials to a CTCL partner, the Center for Civic Design, which is a Maryland-based policy organization focused on election administration that partners with left-of-center organizations such as Pierre Omidyar’s Democracy Fund. Omidyar is founder of the multinational e-commerce corporation eBay and a generous donor to Democratic causes and candidates.

Center for Civic Design likes to say that “democracy is a design problem.”

“The center focuses efforts on the nearly 30 million voters that are not fully fluent in English. It seeks to shape the voting experience and voting materials to ease voter comprehension and increase their voter participation,” InfluenceWatch notes.

The center’s designers crafted, among other election-related materials, the city of Madison’s Voter Pocket Guide, according to an Aug. 28 email to the group of local election officials from Madison City Clerk Maribeth Witzel-Behl.

In her email, Witzel-Behl also notes Madison’s “Democracy in the Park” events in late September and early October. Advocates of election security have described the events as ballot harvesting campaigns.

May introduced Michelle Nelson, Kenosha’s information coordinator, to Ryan Chew, Wisconsin state lead for the elections group, as one of the Center for Tech and Civic Life’s “technical assistance partners” available to support the city clerk’s office.

“He and his team will be connecting with you in the coming days regarding [absentee ballot] drop boxes for November,” May wrote in an Aug. 11 email.

May said Chew wanted Kenosha election officials to get video footage of poll workers “handling mail ballots,” adding that the images could be “used for public messaging in November.”

She sent a follow-up email Aug. 17 to Nelson, laying out precisely what Chew could do for Kenosha elections.

Chew, long the deputy director of elections for Cook County, Illinois, appears to be a critic of President Donald Trump and a supporter of his Democratic challenger, Joe Biden, based on his tweets in recent months.

“Congressmen @dgvaladao and @RepTomRice, thank you for your votes on impeachment, no doubt difficult for you, but important for the future of democracy,” Chew wrote on his Twitter account Jan. 13, the day the House impeached Trump for a second time and a week before Biden’s inauguration. “As I understand it, this was the most bipartisan impeachment vote in history.”

The two Republican congressmen he mentions—Reps. David Goncalves Valadao of California and Tom Rice of South Carolina—were among 10 Republicans who voted to impeach Trump a second time.

On Nov. 4, the day after a presidential election that remained in doubt in key battleground states, Chew tweeted to two liberal pundits—Nate Silver, founder of political website FiveThirtyEight, and Josh Marshall, founder of Talking Points Memo.

Nelson did not return a call seeking comment, nor did Krauter, the city clerk-treasurer. Antaramian, the mayor, did not respond to requests for comment Monday.

Asked to explain why, Morrissey replied in a second email: “No, we will let it follow the process.”

The emails show that Kenosha, like the four other “WI-5” cities, signed a contract with the Center for Tech and Civic Life for the $862,779 in grant money that the city received.

That’s the real rub, legally speaking, say the lawyers representing the complainants in Kenosha, Green Bay, and Racine. Binding city election officials to the terms of an outside groups’ “election safety and security” contract, they say, is at odds with the U.S. Constitution. That document designates municipal clerks and the Wisconsin Elections Commission as the only overseers of elections in the state.

The hefty grants issued to each of the five Wisconsin cities came with “clawbacks,” meaning the Center for Tech and Civic Life could take back the funding if the cities didn’t do what CTCL asked.

Coordination and interconnections among the five cities and the outside, third-party groups is clear in their communications.

In an email with the subject line “Center for Tech & Civic Life Next Steps, Kenosha,” Vicky Selkowe, manager of strategic initiatives and community partnerships for the city of Racine, introduces Nelson and other members of the city clerk/treasurer’s office to Tiana Epps-Johnson, CTCL’s founder and executive director.

“Tiana will be sending you a draft grant agreement for your review and approval on Monday,” Selkowe wrote in the July 10 email. “Tiana and her team have arranged for extensive expert technical assistance from fantastic and knowledgable [sic] partners across the country, to help each city implement our parts of the Plan.”

The “plan” is the so-called Safe Voting Plan that the five cities put together to rake in more than $6.3 million in combined CTCL grants at the time. That amount ultimately would exceed $8 million.

The question that no one from four of the five “Wi-5” cities seems to ask or be concerned about: Why are “experts” from all over the country coming into their cities to “help” with the Nov. 3 presidential election?

In the end, Wisconsin’s five largest cities saw massive turnout, with Biden substantially benefiting from it.

Biden won Green Bay by about 4,000 votes, but lost surrounding Brown County to Trump, 52.8% to 45.6%. Trump also won Racine County with 51.3%, although Biden picked up more votes in the city of Racine.

In final statewide official results, Biden defeated Trump by 49.6% to 48.9%, flipping a state with 10 electoral votes that Trump won in 2016.

The Center for Tech and Civic Life received $350 million from Facebook CEO Mark Zuckerberg and his wife to “help” local election offices across the nation administer “safe and secure elections.”

As a Wisconsin Spotlight investigation uncovered, local election officials in Wisconsin worked with the center’s partner organizations, such as the National Vote at Home Institute. Emails show longtime Democratic operative Michael Spitzer-Rubenstein, Wisconsin lead for the institute, was intricately involved in administering both Green Bay’s and Milwaukee’s elections, offering to “cure” or correct absentee ballots.

Spitzer-Rubenstein’s organization shows up in the Kenosha emails, too. They also reveal that Kenosha city officials were not shy about asking for additional help from CTCL.

“I’m preparing to discuss with [city] administration the need for full time election specialist staff for our upcoming budget. I realize this is not grant related; however, I thought maybe someone in your group could provide some insight as to why that is useful in a city clerk’s office,” Nelson, Kenosha’s information coordinator, wrote to CTCL’s May in an Aug. 19 email.

May apparently was happy to oblige, sending back “language” she drafted that “may help you frame the need for more staff.”

Robert Spindell, a Republican-appointed member of the Wisconsin Elections Commission, said he is troubled by the developments.

“What we see from this is the Golden Rule, which is basically the man or woman who has the gold makes the rules,” Spindell said. “I don’t think anyone in Wisconsin buys that this is a good idea.”

As with the previous complaints, he said, Wisconsin Elections Commission staff attorneys and Wolfe, the administrator, will not be able to participate in reviewing the complaint since it names Wolfe.

The Wisconsin Department of Justice will have to appoint outside counsel, as was the case in the complaints filed against Green Bay and Racine.

This report was updated May 5 to include the city administrator’s comment.