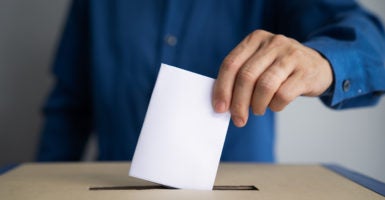 Allowing individuals other than the voter or his immediate family to handle absentee ballots is just asking for mischief and wrongdoing. (Photo: Getty Images)

Vote harvesting gives party activists, campaign consultants, and other political guns for hire the ability to manipulate election outcomes either through coercion of voters or outright ballot theft and forgery. Yet, in places such as California and the District of Columbia, vote harvesting is perfectly legal.

Vote harvesting occurs when third parties—campaign workers, for example—collect absentee ballots from voters and deliver them to election officials.

Most people had never heard that term until the 2018 elections. In North Carolina’s 9th Congressional District, the Republican candidate was accused of illegal vote harvesting and, ultimately, the state election board overturned the election.

Meanwhile, on the West Coast, concerns about vote harvesting were raised in California after unexpected losses by Republicans in several congressional races. Concerns were especially acute in Orange County, where the registrar of voters reported that individuals were dropping off hundreds of absentee ballots each.

All states allow an individual to vote with an absentee ballot, often referred to as a mail-in ballot. The completed ballots are usually mailed back to local election officials, although voters can personally deliver their ballots, too.

The vote-harvesting issue arises in the District and the 27 states that allow anyone to pick up an absentee ballot from a voter and deliver it to election officials. The contrast between these two approaches can be seen in North Carolina and California.

Allowing individuals other than the voter or his immediate family to handle absentee ballots is a recipe for mischief and wrongdoing.

Neither voters nor election officials can verify that the secrecy of the ballot was not compromised, or that the ballot submitted in the voter’s name by a third party accurately reflects the voter’s choices and was not fraudulently changed by the vote harvester. And there is no guarantee that vote harvesters won’t simply discard the ballots of voters whose political preferences for candidates of the opposition party are known.

It also gives campaign and political party intermediaries the ability to influence voters while they are casting a ballot out of election officials’ sight and without any supervision by them.

Thus, there is no one present to ensure that voters are not being coerced, intimidated, threatened, or paid for their vote.

The Heritage Foundation’s election fraud database contains cases illustrating this problem. They include the conviction in 2017 of the former mayor of Eatonville, Florida, for coercing absentee voters to cast ballots for him—ballots that won him the election.

Then there is the former mayor of Martin, Kentucky, who (along with her husband and son) was convicted in 2014 for threatening and intimidating poor and disabled citizens into casting absentee ballots for her, including ballots that the mayor had filled out.

Obviously, there needs to be a way for individuals who cannot vote in person on Election Day due to illness or some other valid reason to cast a vote, and absentee ballots are the easiest way to make that possible. But the rules governing absentee ballots should not make them susceptible to theft, forgery, or coercion.

That is exactly what states are doing when they allow vote harvesting. Giving third parties who have a stake in the outcome of an election unsupervised access to voters and their absentee ballots is not wise.

Indeed, it is a proven threat to the integrity of our elections.