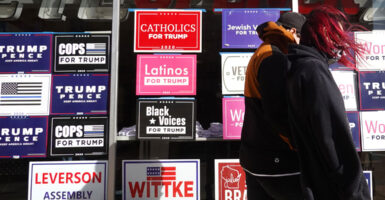 Campaign signs cover the front window of Racine County GOP headquarters on Nov. 1, the last day of early voting in Racine, Wisconsin. Kenneth Brown, county GOP chairman, is one of five residents to file a formal complaint about outside interference in the city's election. (Photo: Scott Olson/Getty Images)

Brown is one of five residents of Racine, Wisconsin, who filed a complaint Thursday alleging that Racine Mayor Cory Mason and City Clerk Tara Coolidge allowed left-leaning activists to take over administration of the presidential election in the city.

Their complaint, filed with the Wisconsin Elections Commission, also names the commission’s administrator as a defendant.

New documents obtained by Wisconsin Spotlight show the city of Racine sought hundreds of thousands of dollars in funding for communication efforts targeting “voters with criminal records” and the purchase of a recreational vehicle to serve as a “mobile voting precinct,” among other questionable election initiatives.

“This is something I am really passionate about, bringing this stuff to light,” Hesse said. “For me, exposing the tiniest amount is going to be like a domino effect.”

Brown, who runs an optometry and eyewear store and is vice chairman of the Republican Party of Racine County, is represented by The Amistad Project, a national voter integrity watchdog.

“Racine failed to comply with state laws, including obtaining from the [Wisconsin Elections Commission] a prior determination of the legality” of the conditions the third-party groups placed on the city in return for more than $940,000 in grant funding for “safe, inclusive, and secure” elections, the five residents’ complaint states.

In doing so, the city usurped the constitutional responsibilities of the local election official and the state elections regulator, the five complainants allege.

Mason, a Democrat, and other Racine city officials did not reply to Wisconsin Spotlight’s request for comment.

Reid Magney, spokesman for the Wisconsin Elections Commission, said the agency had not received the complaint as of Thursday afternoon.

“We do not comment on complaints,” Magney said, adding that commission staff may have to bring in outside counsel to review the complaint, to avoid any conflict.

The complaint is similar to one filed earlier this month on behalf of five residents of Green Bay, Wisconsin, alleging that officials there allowed private activist groups to control significant aspects of the 2020 election, including ballot “curing” and vote counting.

The Chicago-based Center for Tech and Civic Life handed out more than $8 million in “election safety and security” grants to Wisconsin’s five largest and most heavily Democratic cities—Milwaukee, Madison, Green Bay, Kenosha, and Racine.

As a Wisconsin Spotlight investigation uncovered, CTCL required the “Wisconsin 5” cities to sign contracts that included provisions allowing the center to “claw back” the funding if they failed to meet the center’s demands. Local elections officials in the five cities had to work with the center’s partner organizations, such as the National Vote at Home Institute.

Emails show that a longtime Democratic operative, Michael Spitzer-Rubenstein, the institute’s Wisconsin lead, was involved intricately in the administration of Green Bay’s and Milwaukee’s elections, even offering to “cure” or correct absentee ballots.

The new complaint claims that Racine is where recruitment of the “Wisconsin 5” began. In late May, the Center for Tech and Civic Life issued a $100,000 grant to the southeast Wisconsin city to “recruit other Wisconsin cities to join the ‘Wisconsin Safe Voting Plan.’”

Mason, according to the complaint, spoke to his fellow liberal mayors in Madison, Milwaukee, Green Bay, and Kenosha about accepting CTCL’s grants—with the strings attached.

“CTCL authorized the city of Racine to distribute from the $100,000 grant, $10,000 to each of the four recruited cities (keeping $10,000 for itself), as an incentive for them to participate with Racine in the CTCL conditional grants,” the complaint states.

Emails show that Mason’s office in May 2020 set up virtual meetings with the four other mayors. CTCL announced the first round of grants to the “Wisconsin 5” on July 7.

Whitney May, director of government services for the Center for Tech and Civic Life, sent an email in August to the communities’ election officials, declaring: “You are the famous WI-5 … excited to see November be an even bigger success for you and your teams.”

The Zuckerberg grants via CTCL, which included the “clawback” provisions, required the five Wisconsin cities, among other things, to:

—Encourage and increase absentee voting (by mail and early, in-person).

The contracts, according to the complaint from the Racine residents, also required the five cities to employ “voter navigators” to help voters “complete their ballots.” These navigators later would be “trained and utilized” as election inspectors.

Grant-funded election workers then would “enter new voter registrations and assist with election certification tasks.” The cities were instructed to use “paid social media” and “print and radio advertising” to direct voters “to request and complete absentee ballots.”

The complaint notes that these are initiatives that cannot be done at the direction of the Center for Tech and Civic Life or other third-party groups, and many of these duties are not the domain of municipal clerks.

“Promoting” and “encouraging higher percentages of our electors to vote absentee” violates Wisconsin election law, which the complaint says specifies that “the privilege of voting by absentee ballot must be carefully regulated to prevent the potential for fraud or abuse; to prevent overzealous solicitation of absent elector’s who may prefer not to participate in an election.”

Documents show the city of Racine at one point sought $337,000 for the recreational vehicle and a broad voter messaging plan. The city asked for:

—$80,000 “to design and implement a comprehensive voter outreach communications plan, including ads on Facebook, Instagram, and Snapchat.”

—$5,000 to rent billboards in “key parts of the city to place messages in Spanish to reach Spanish-speaking voters.”

—$2,000 for targeted outreach “aimed at city residents with criminal records to encourage them to see if they are not eligible to vote.”

—$250,000 to purchase a mobile voting precinct (the recreational vehicle), so Racine officials “can travel around the city to community centers and strategically chosen partner locations and enable people to vote in this accessible (ADA compliant), secure, and completely portable polling booth on wheels.”

The pitch assured the Center for Tech and Civic Life that the RV would be an “investment that the city will be able to use for years to come.”

In August, the Racine City Council approved a contract with Burlington RV to purchase the recreational vehicle —also known as a “portable polling booth on wheels.” The council also gave its blessing to a contract of up to $120,000 with Kane Communications to conduct outreach ahead of the Nov. 3 election, according to the Racine Journal Times.

Ultimately, the Center for Tech and Civic Life also distributed grants to smaller communities. But the funding paled in comparison to the money the five largest Wisconsin communities received.

In Green Bay, for instance, the Zuckerberg-funded grants more than quadrupled the city’s election budget for all of 2020. The complainants assert that this concentrated funding favored “urban demographic group(s) over other non-urban Wisconsin voters in federal elections, putting the integrity of the election process in jeopardy—and violating complainants’ rights to lawful and equal elections.”

Meagan Wolfe, administrator of the Wisconsin Elections Commission, last month told a state legislative committee that it’s up to each city to determine what grant funding it seeks—strings or no strings attached. The complaint challenges the administrator’s assertion.

Brown, one of the five Racine residents who filed their own complaint, said his intention is not to reverse the results of the November election, although he does believe election fraud was involved. Brown said he wants to put a “giant magnifying glass” on third-party influence on elections.

“Having elections be safe and fair and honest in Wisconsin and every single state in the country is in everyone’s best interest,” the Racine resident said. “WEC needs to step up and make sure the election laws are followed.”

In addition to Hesse, the other complainants include Marty Prujansky, a first-time observer on election night at Racine’s central ballot-counting facility. Prujansky, whose wife Mary also is a complainant, says the city clerk told him to leave after he complained that extreme “social distancing” measures made it impossible for him to do his job.

The final complainant is Dale Giles, a senior software engineer for GE Healthcare.