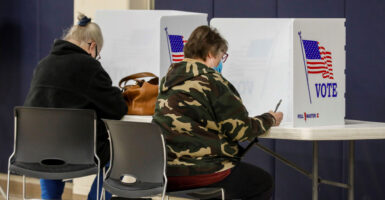 “Hundreds of millions of dollars purchased local election offices in 2020 to benefit one political candidate, paying salaries of election officials and literally dictating the manner in which the election should be managed,” Phill Kline, director of The Amistad Project said in a press release. “Evidence in Green Bay proves this shadow government ran the election and now it is time those involved come clean.”

The Chicago-based Center for Tech and Civic Life handed out more than $8 million in “election safety and security” grants to Wisconsin’s five largest and most heavily Democratic cities—Milwaukee, Madison, Green Bay, Kenosha and Racine. The center received $350 million from Facebook CEO Mark Zuckerberg and his wife to “help” local elections offices administer “safe and secure elections.”

As a Wisconsin Spotlight investigation uncovered, the Center for Tech and Civic Life required the “Wisconsin 5” cities to sign contracts that included funding clawback provisions if they failed to meet the center’s demands.

Local elections officials had to work with the center’s partner organizations, like the National Vote at Home Institute. Emails show longtime Democratic operative Michael Spitzer-Rubenstein, Wisconsin lead for the institute, was intricately involved in the administration of Green Bay’s and Milwaukee’s elections, even offering to “cure” or correct absentee ballots.

“This is about safeguarding future elections and establishing the precedent that private corporations and tech oligarchs should not be calling the shots,” said Erick Kaardal, special counsel for The Amistad Project, adding:

Wisconsin law puts city clerks in charge of administering elections at the local level, yet internal emails show that Green Bay’s city clerk was boxed out by the mayor’s office, which handed over the keys to the counting room to Michael Spitzer-Rubenstein …

Teske grew so frustrated with the third-party groups and city officials meddling in her office and bullying her and her staff that she resigned.

His group first raised similar concerns in a lawsuit filed in September, with several cases still being litigated. The Center for Tech and Civic Life at the time called The Amistad Project’s claims “baseless,” noting that it pushed its grants far and wide, not just to the biggest, left-leaning cities in battleground states. But, at least in Wisconsin, it’s clear the center gave significantly more funding to the Wisconsin 5 than it did to the other grant communities.

Kaardal joined the complainants at a press conference in Green Bay.

James Fitzgerald said he was deeply concerned about the many “irregularities” he saw on election night—and by what he learned afterward.

“I’m here today for several reasons, but most importantly for integrity, restoring integrity of the elections at the ballot box here in Green Bay,” said Fitzgerald, one of the five complainants and chairman of the Brown County Republican Party.

The complainants may face an uphill battle with a Wisconsin Elections Commission led by a highly partisan chairwoman appointed by Democrats. And Wisconsin Elections Commission Administrator Meagan Wolfe was not only aware of the left-leaning groups involved in the elections in Green Bay and Milwaukee, she promoted them to other elections officials.

“The WEC administrator’s involvement raises serious doubts regarding the objectivity of the commission in conducting an investigation,” stated Kaardal, adding that Wolfe should recuse herself from any investigation the commission may conduct. “Fairness, openness, and a thorough review by WEC are necessary, and Ms. Wolfe has demonstrated her hostility to such an approach.”

“The WEC does not comment on the substance of pending complaints. We will follow the process outlined in statute for processing and adjudicating complaints,” the spokesman said.