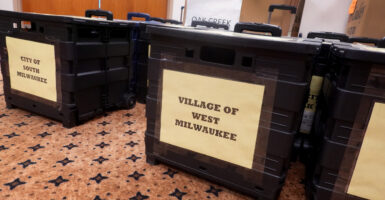 Ballots from the Nov. 3 election are stored in a guarded room in the Wisconsin Center before the start of a recount scheduled to begin on Nov. 19, 2020, in Milwaukee, Wisconsin. (Photo: Scott Olson/Getty Images)

MADISON, Wis.—Pushing back against claims of “conspiracy theories” from Democrats, the chair of the Wisconsin Assembly’s Campaign and Elections Committee pledges the panel will get answers to integrity questions surrounding last year’s elections.

“We’re going to pursue it and we’re going to get to the bottom of it,” state Rep. Janel Brandtjen, R-Menomonee Falls, said Tuesday during debate over a resolution that directs the committee to “investigate the administration of elections in Wisconsin.”

The committee in particular will focus on “elections conducted after January 1, 2019.” There will be an emphasis on the myriad concerns that arose in November’s presidential election, as evidenced by the alarming level of involvement by liberal third-party groups in Green Bay and elsewhere.

The resolution comes with the power to subpoena witnesses and documents, a tool not used in the Legislature in decades, according to legislative sources.

Assembly Speaker Robin Vos, R-Rochester, could issue subpoenas on behalf of the committee if witnesses refuse to testify. That may be the case in Green Bay, where Mayor Eric Genrich did not answer Brandtjen’s request to appear at an Elections Committee hearing next week, and the city attorney said she has a “scheduling conflict.”

Assembly Democrats railed against the resolution, calling the investigation an attack on democracy fueled by unfounded claims of election fraud. More so, they insist questioning the election results is more than sour grapes from Republicans, it’s rife with racism.

In final official results in Wisconsin, Democrat nominee Joe Biden defeated Trump by 49.6% of the vote to 48.9%, flipping a state with 10 electoral votes that Trump won in 2016.

Emails obtained by Wisconsin Spotlight show representatives from left-leaning organizations heavily involved in the preparation and administration of the presidential election in Green Bay and, it appears, Milwaukee.

Particularly concerning is the work of Michael Spitzer-Rubenstein, a long-time Democratic operative who served as Wisconsin leader for the National Vote at Home Institute.

The National Vote at Home Institute, is one of several private, left-leaning groups, funded largely by Facebook CEO Mark Zuckerberg.

Spitzer-Rubenstein, with an impressive political resume working for Democratic politicians and campaigns, had significant influence over the administration of the presidential election in Green Bay and, it appears, in Milwaukee.

Spitzer-Rubenstein appears to have played point man for the coordinated effort between the “Wisconsin 5,” Milwaukee, Madison, Green Bay, Kenosha and Racine—which received a combined $6.3 million in Zuckerberg money.

Emails show the activist offered to correct or “cure” Green Bay’s absentee ballots as he said he did in Milwaukee, and he appears to have had access to ballots, “sensitive machines,” and “hidden” networks at Green Bay’s Central Count location.

State Rep. Shae Sortwell, R-Two Rivers, called out the hypocrisy of Democrats who say they stand with municipal clerks in charge of running local elections.

They don’t seem to be standing with Kris Teske, former Green Bay city clerk who grew increasingly frustrated with the mayor’s office and the third-party groups meddling in her office’s business. So frustrated, in fact, she quit.

“I got ahold of the city clerk from the city of Green Bay who practically begged me to do an open records request on the mayor’s office and on her emails because she wanted these records to get out so that the people of Wisconsin would know that the mayor of Green Bay in his corruption had taken over the election,” Sortwell said during the debate.

Sortwell filed one of the open records requests that produced the internal emails.

State Rep. John Jagler, R-Watertown, said there are basic election integrity issues that need to be reviewed. Jagler said he received complaints that a local election worker wasn’t asking for voter IDs during the election.

In another case, a Waukesha man said a review of voting records showed his mother had voted 11 times since he became her legal guardian. Under the court-appointed conservatorship, the elderly woman was not legally allowed not vote.

“We have corporate dollars being inserted into our elections, … Was it legal? We don’t really have any laws to deal with corporate funds. ”

Brandtjen said. “I’ll tell you one thing, if the Koch brothers had put money into Waukesha County and the tea party had counted those votes, there would be a lot of conversations in the press about that.”