Ashton Carter Should Be Asked These Questions During His Hearing 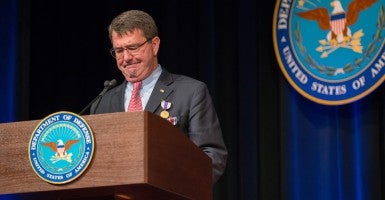 On Wednesday, the Senate Armed Services Committee will consider the nomination of Ashton Carter to be America’s next defense secretary.

Most analysts find Carter to be a capable manager, knowledgeable defense expert and savvy bureaucrat. But the problem remains that he can only do so much while Obama and his exclusive National Security Council continue to exert control over American military power.

Yet even as the White House micromanages national security, the secretary of defense still has great responsibility and authority to ensure that the military provides for the common defense. Armed Services Committee members can use their time wisely by questioning Carter about key policies he can shape to improve the state of the military. Here are a few key questions they should ask:

Providing for the common defense requires both a clear commitment from Congress and strong leadership from the executive branch. Neither has occurred in recent years.

As Carter is expected to receive confirmation with ease, the Senate should use this hearing to set the tone for their relationship with him in the coming year and understand his vision for running the military.