The Enduring Relevance of Reagan’s Speech to the British Parliament 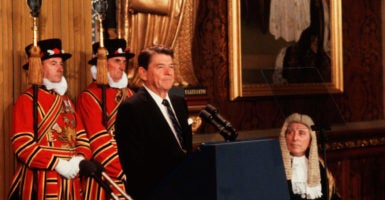 President Ronald Reagan’s speech to the British Parliament at Westminster, delivered on June 8, 1982, continues to inspire in its vision and relevance.

When Reagan gave his eloquent review of the Cold War and prediction about its final decade, he famously stated that the Soviet Union and its ideas would end up on the “ash heap of history.” Which they did.

Democracy, Reagan predicted, would be on the march around the globe. The following year, Reagan created the National Endowment for Democracy to move that vision forward.

Today, the endowment is active in 90 countries, and many nations formerly oppressed by Soviet communism are enjoying a freedom and prosperity their parents’ generation could only dream of.

The Berlin Wall fell, and so did the Soviet Empire, under pressure from the West and the internal demands of its own citizens.

Yet, today, neither international bad actors nor bad ideas have disappeared from the face of the earth. We did not arrive at the “end of history” with the fall of the Soviet Union in 1991.

The freedoms that so many fought and died for during the Cold War must be defended continuously. Accordingly, Reagan’s Westminster speech bears rereading again and again.

This week’s state visit of President Donald Trump to Britain has aimed to cement trade and political ties in the “special relationship” between the U.S. and the U.K. The British royal family put on a good show, and outgoing Prime Minister Theresa May did the same.

But the British elites, the U.K. media, and the left were up in arms. Labour Party leader Jeremy Corbyn refused to attend the state dinner with the queen in Trump’s honor, and London Mayor Sadiq Khan accused Trump of being the “poster boy” for the far right.

In 1982, a time of great turmoil over the Intermediate-Range Nuclear Forces in Europe, Reagan reminded the Brits of the two countries’ “special relationship.”

“Speaking for all Americans, I want to say how very much at home we feel in your house. Every American would, because this is, as we have been so eloquently told, one of democracy’s shrines,” he said. “Here the rights of free people and the processes of representation have been debated and refined.”

Today, Russia seeks to exploit every possible crack in the West, just as the Soviets did during the Cold War. Most recently, Russian efforts to undermine faith in our democratic institutions and media met with overwhelming success in the 2016 U.S. presidential election.

In 1982, Reagan spoke of the evils of totalitarianism.

“We’re approaching the end of a bloody century plagued by a terrible political invention—totalitarianism. Optimism comes less easily today, not because democracy is less vigorous, but because democracy’s enemies have refined their instruments of repression,” he said. “Yet optimism is in order, because day-by-day democracy is proving itself to be a not-at-all-fragile flower. … Regimes planted by bayonets do not take root.”

Today, bad actors like Cuba and Russia are wreaking havoc on the international stage. The devastation of Venezuela is a case in point. Iran continues its pursuit of nuclear capability and its support of Middle Eastern terrorism aimed at Israel and moderate Arab states. China seeks regional domination and has global ambitions.

In 1982, Reagan spoke of confronting the enemy.

“At the same time, we see totalitarian forces in the world who seek subversion and conflict around the globe to further their barbarous assault on the human spirit,” he said. “What, then, is our course? Must civilization perish in a hail of fiery atoms? Must freedom wither in a quiet, deadening accommodation with totalitarian evil?”

Today, most troubling of all, socialism is promoted by certain politicians as an actual alternative to free-market democracy.

While socialism is not the same as communism, there is merely a difference of degrees. Understandably, free education, free health care, and all of socialism’s other promises appeal to younger voters, who have more college debt than property and income.

Furthermore, they have zero firsthand experience of socialism’s trade-off between government handouts and soul-crushing state control. If they did, they would think again.

The decay of the Soviet experiment should come as no surprise to us. Wherever the comparisons have been made between free and closed societies … it is the democratic countries that are prosperous and responsive to the needs of their people. And one of the simple but overwhelming facts of our time is this: Of all the millions of refugees we’ve seen in the modern world, their flight is always away from, not toward, the communist world.

May this—the most important lesson of the 20th century—never be forgotten.