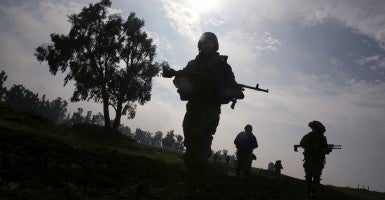 Israeli soldiers from the Golani brigade take part in training near the city of Katzrin. (Photo: Baz Ratner/Newscom)

The long shadow war between Israel and Iran erupted in a high-profile clash yesterday, as Iran’s surrogate Hezbollah attacked an Israeli military convoy, killing two Israeli soldiers and wounding seven. The attack was a long-anticipated reprisal for the Jan. 18 Israeli airstrike on a Hezbollah convoy in Syria that killed six Hezbollah militants and an Iranian general deployed to Syria as part of the Islamic Revolutionary Guard Corps’ elite Quds Force.

The death of the Iranian general prompted the commander of the Revolutionary Guards, Gen. Mohammad Ali Jafari, to threaten Israel with “ruinous thunderbolts.” Hezbollah also sought vengeance for the strike, which also killed Jihad Mugniyah, a rising star who was the son of the notorious Hezbollah leader Imad Mugniyah, who plotted the 1983 bombings of the U.S. Embassy and Marine barracks in Beirut, Lebanon.

Imad Mugniyah was assassinated in a mysterious bombing in Syria in 2008 that Hezbollah blamed on Israel. After his death, his son Jihad was reportedly adopted by Maj. Gen. Qassem Suleimani, the powerful leader of the Quds Force.

Hezbollah has become increasingly involved in the Syrian civil war under Iran’s direction to prop up the Assad regime. Approximately 5,000 Hezbollah fighters have been deployed inside Syria, along with other Iran-backed Shiite militias from Iraq and Afghanistan, in addition to hundreds of Iranian Revolutionary Guards.

Israel has officially remained neutral in the Syrian civil war, but has warned that it would take military action to prevent Iran or Syria from transferring chemical weapons or advanced military technologies to Hezbollah. Israel backed up these warnings with limited air strikes, including a major strike last month against warehouses at Damascus airport that reportedly contained Iranian missile systems destined for Hezbollah.

Iran and Hezbollah have strong reasons to prevent the current tit-for-tat military strikes from expanding into a full-fledged war. Hezbollah is spread thin and has its hands full in waging the brutal war in Syria. Iran, for its part, wants to preserve Hezbollah’s military forces as a deterrent to a possible Israeli military strike on Iran’s nuclear infrastructure.

But both Iran and Hezbollah are likely to shift the conflict from the military arena, where Israel has the advantage, to terrorist operations, their strong suit. Already, there is a report that Iran’s official Fars news agency and a website linked to Iran’s Revolutionary Guards have published articles calling for the assassination of Israeli Prime Minister Benjamin Netanyahu’s children.

These latest threats are likely to add a new dimension to Netanyahu’s address to Congress on March 3 on the Iran nuclear issue.