What the Candidates Need to Know About Yucca Mountain 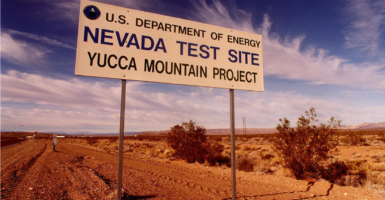 Yucca Mountain has turned into a political football and a litmus test for many politicians, some of whom have built whole careers around this issue alone. (Photo: Chris Polydoroff /KRT/Newscom)

The final presidential debates take place Wednesday in Las Vegas. Given the location, a controversial issue sure to come up is that of a nuclear waste repository at Yucca Mountain.

The repository is designed to hold spent nuclear materials from national security activities and commercial nuclear power reactors. Billions of dollars have already been spent on exploratory tunnels and other construction at the site, but it has yet to be built.

Yucca Mountain has turned into a political football and a litmus test for many politicians, some of whom have built whole careers around this issue alone. In Congress and especially in Nevada, parties have dug their trenches deep—“Yucca or bust” on one side, and “over my dead body” on the other.

The opposition to Yucca Mountain has a long history but largely boils down to anti-nuclear sentiments and those who have used these arguments to gain political advantage by posturing themselves as protectors of the public.

What’s needed is some new thinking on an issue that is not black and white. Here is what the candidates need to know about Yucca Mountain:

History: How We Got Here

The Nuclear Waste Policy Act of 1982 assigned responsibility for permanent disposal of nuclear waste to the federal government. After evaluating alternative sites, Congress amended the act to designate Yucca Mountain as the site for a national repository.

Congress set a deadline for the Department of Energy to begin collecting waste by 1998, but not a single cask has been collected to date (with the exception of fuel from the Three Mile Island accident).

Today, the federal government remains liable for over 76,000 tons of commercial nuclear waste. The federal government has already paid out $5.3 billion of taxpayers’ money in settlements for failure to collect waste as promised, with tens of billions more expected. The government’s inability to manage waste has also cost Americans heavily in the form of lost opportunity in the nuclear industry.

The Law: Nuclear Waste Policy Act and the Courts

Despite the clear direction of the Nuclear Waste Policy Act as amended, and lacking any technical or scientific justification, the Obama administration unilaterally determined that Yucca Mountain was “not a workable option.”

Leaving America with no waste policy at all, the administration embarked on fact-finding missions that gave the appearance of progress but accomplished little beyond more government reports and legal fees. The Obama administration then proposed a new policy that was tall on rhetoric but short on any technical details, calling for interim storage facilities and a permanent repository—just like Yucca Mountain.

Regardless of the palatability of the law to the Obama administration, the U.S. Court of Appeals determined in August 2013 that until Congress said otherwise or no funds remained, the president and his administration must promptly implement the law, starting with the completion of the licensing process for Yucca Mountain by the Nuclear Regulatory Commission.

Regardless of what happens with Yucca Mountain, the scientific community and global experience have supported deep geologic storage as critical to any waste management plan.

In 2008, the Energy Department applied for a license with the Nuclear Regulatory Commission to build a facility at Yucca Mountain because the site “brings together the location, natural barriers, and design elements most likely to protect the health and safety of the public, including those Americans living in the immediate vicinity, now and long into the future.”

Once the courts kicked the Yucca Mountain review back into motion, the commission finished its safety evaluation report. It concluded that a facility at Yucca Mountain is technologically feasible and that the design meets all Nuclear Regulatory Commission requirements to protect long-term public health and safety. A license approval is yet contingent on several conditions—including land and water rights, public hearings, and funding from Congress.

Specifically, the commission needs to finish the Yucca Mountain review. The Energy Department needs to rejuvenate the Office of Civilian Radioactive Waste Management, an office that the Obama administration shrunk to near nonexistence. And Nevadans should have more control over the future. Beyond that, Congress needs to recognize that the current system does not work.

Finishing the commission’s license review does not mean “Yucca or bust.” It merely brings all of the information to the table for Congress and others, like Nevada and the nuclear industry, to make wise decisions about what’s next.

There are many different directions we can go from there. Rather than a problem or liability, nuclear waste management has the potential to be an asset in America.