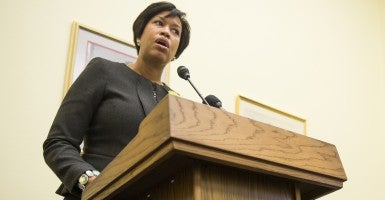 Over the weekend, District of Columbia Mayor Muriel Bowser signed into law two pieces of bad legislation. These policies will saddle religious organizations and employers with a choice of complying with coercive laws that force them to violate their religious beliefs and organizational missions, or staying true to their beliefs in defiance of unjust laws.

Congress now has the chance to correct this and protect the rights of D.C. residents.

Bowser signed into law two euphemistically titled acts: The “Reproductive Health Non-Discrimination Act” and the “Human Rights Amendment Act.” In fact, the former discriminates against pro-lifers, and the latter violates the human right of religious liberty. Here’s how. The former could force employers in the nation’s capital to cover elective, surgical abortions in their health plans and require pro-life organizations to hire individuals who advocate for abortion. The latter could force Christian schools to recognize an LGBT student group or host a “gay pride” day on campus.

Congress should prevent the bills from going into effect and should restore pro-life conscience and religious liberty protections in the District. Once both bills are delivered to House Speaker John Boehner (R-Ohio), Congress will have 30 legislative days to review the policy change. The U.S. Constitution (Article 1, Section 8) empowers Congress to “exercise exclusive legislation in all cases whatsoever” over the District. Congress delegated some of this authority in 1973 when it passed the Home Rule Act, which created a city council and mayor—but which retained authority for Congress to overrule bad policies enacted by the D.C. government.

Congress can pass a Resolution of Disapproval which, when signed by the president, effectively overturns the District legislation in question. Congress can also attach riders to the annual appropriations which provide federal funds to the District, preventing government monies from being used to put a law into effect. Indeed, there are over 75 such riders currently in effect.

Congress should do this because no governmental entity should force a citizen to promote or pay for abortion, or violate their beliefs that men and women are made for each other in marriage.

Even former D.C. Mayor Vincent Gray urged the council to postpone voting on the abortion bill, noting a review of the legislation by the Office of Attorney General “deemed the legislation legally insufficient.” The mayor’s letter continued:

The threat against conscience rights is serious for many organizations in D.C. like Americans United for Life, March for Life, Family Research Council and the Archdiocese of Washington, among others. Organizations whose mission is to empower women facing unplanned pregnancies with physical and emotional support or who advocate for policies that affirm the dignity and value of both mother and child in law could be forced to provide health insurance for the life-ending procedure they oppose.

Likewise, if this new “Human Rights” legislation goes into effect, it will severely infringe the ability of D.C. religious schools to operate according to their religious beliefs. After all, many religions believe that we are created male and female, and that male and female are created for each other. The government should not force religious institutions to violate these beliefs.

In addition to the specific actions Congress can take to remedy the problems with the D.C. legislation, Congress should also act to protect conscience and religious liberty more broadly.

Since 2004, the Weldon Amendment has prohibited state and local governments receiving certain federal funds from discriminating against health care entities that decline to “provide, pay for, provide coverage of or refer for abortions.” That protection extends to health care plans. To the extent the D.C. bill would force pro-life organizations to pay for abortion coverage, the law would be in violation of the Weldon Amendment. Enforcement of the conscience policy, however, is left to the discretion of officials in the Department of Health and Human Services.

Congress should provide victims of conscience rights violations the ability to defend their rights in court, not leave them to wait on bureaucrats in the Obama administration. The Abortion Non-Discrimination Act would do just that by modifying the Weldon amendment to provide a private right of action for individuals and institutions who are discriminated against because they decline to participate in or pay for coverage of abortion.

In addition to protecting conscience rights in the abortion context, Congress should protect marriage and religious liberty at the federal level. Policy should prohibit the government from discriminating against any individual or group, whether nonprofit or for-profit, based on their beliefs that marriage is the union of a man and woman or that sexual relations are reserved for marriage. The government should be prohibited from discriminating against such groups or individuals in tax policy, employment, licensing, accreditation or contracting.

The Marriage and Religious Freedom Act—which is expected to be introduced again in the 114th Congress by Rep. Raul Labrador, R-Idaho, in the House and by Sen. Mike Lee, R-Utah, in the Senate—would prevent the federal government from taking such adverse actions.

States need similar policy protections, including broad protections provided by state-level versions of the Religious Freedom Restoration Act and specific protections for beliefs and actions about marriage and abortion.

Protecting religious liberty and the rights of conscience is the embodiment of a principled pluralism that fosters a more diverse civil sphere—and a peaceful coexistence even amid disagreement. In a nation founded on limited government and religious freedom, government should not attempt to coerce any citizen, association, business or school into promoting or paying for abortion, or celebrating same-sex relationships.