D.C. Passes Bill That Could Force Pro-Life Organizations to Pay for Abortion Coverage 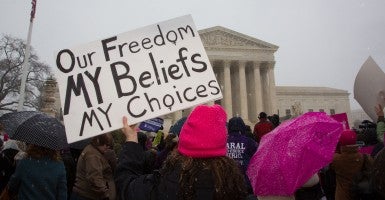 Today, the Council of the District of Columbia passed a bill that could force employers in the nation’s capital to cover elective abortions in their health plans and require even pro-life organizations to hire individuals who oppose their views on abortion. The bill will now go to Mayor Vincent Gray for approval.

This latest attempt to violate the freedom of individuals in the District should spur Congress to better protect the conscience rights for all Americans.

The “Reproductive Health Non-Discrimination Act,” specifically prohibits employers from discriminating in “compensation, terms, conditions or privileges of employment” on the basis of an individual’s “reproductive health decision making” – including the “termination of a pregnancy.”

In light of comments made by Council member David Grosso at a hearing on the bill earlier this year, the D.C. legislation could be interpreted to force even religious and pro-life employers to provide coverage of elective abortions.

The threat against conscience rights is serious for many organizations in D.C. like Americans United for Life, March for Life, Family Research Council and the Archdiocese of Washington, among others. Organizations whose mission is to empower women facing unplanned pregnancies with physical and emotional support or who advocate for policies that affirm the dignity and value of both mother and child in law could be forced to provide health insurance for the life-ending procedure they oppose.

“This bill is an egregious attack on pro-life conscience,” said Alliance Defending Freedom’s Senior Counsel Casey Mattox, who wrote letters to the council on behalf of a number of pro-life groups in the District. “The government has no business forcing pro-life organizations to pay for elective abortions.”

The bill could also prohibit an organization from making employment decisions in accordance with their beliefs so as to maintain the integrity of their pro-life mission and advocacy.

“Under the proposed bill, a Catholic school could not fire a principal who had an elective abortion, announced this to staff and students, and stated she believed this decision was consistent with Church teaching,” writes Peter Kirsanow, a member of the U.S. Commission on Civil Rights, in a letter to the D.C. council. He explains:

This is absurd….[N]ot only is there nothing invidious about religious organizations making employment decisions on the basis of employee behavior, but such decisions are protected by the First Amendment’s guarantees of freedom of association and freedom of religion.

Even D.C. Mayor Vincent Gray urged the council to postpone voting on the bill a few weeks ago, noting a review of the legislation by the Office of Attorney General “deemed the legislation legally insufficient.” The Mayor’s letter continued:

In addition to those concerns, the District could also be in hot water under federal conscience law. To the extent the D.C. bill would force employers to include coverage of elective abortion in their health plans, the District would be in violation of a federal policy known as the Weldon Amendment.

Since 2004, the Weldon Amendment has prohibited state and local governments receiving certain federal funds from discriminating against health care entities that decline to “provide, pay for, provide coverage of or refer for abortions.” That protection extends to health care plans. Enforcement of the conscience policy, however, is left to the discretion of officials in the Department of Health and Human Services, which has a less-than-illustrious track record of moving quickly on complaints.

Congress should provide victims of conscience rights violations the ability to defend their rights in court, not leave them to wait on bureaucrats in the Obama administration. The Abortion Non-Discrimination Act would do just that by modifying the Weldon amendment to provide a private right of action for individuals and institutions who are discriminated against because they decline to participate in or pay for coverage of abortion.

The D.C. bill is the second time this year a government has forced employers to cover elective abortions in their health plans. In August, California mandated that almost ever health plan in the state include coverage of elective abortions, including those offered by religious organizations, religious schools – even churches. Requests to HHS officials to review the state’s mandate have so far gone unanswered by the Obama administration.

>>> Pastor: As Father of Four Adopted Children, Being Forced to Cover Abortions Is ‘Repulsive Beyond Words’

Policymakers shouldn’t wait for more assaults on conscience to better protect the freedom of every American – from California to D.C. and everywhere in between.

This article has been updated to reflect the Council of the District of Columbia’s decision earlier today.