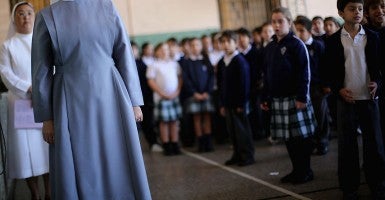 Just before the Christmas break, the D.C. City Council passed a law that could force pro-life organizations to pay for abortion coverage. But that wasn’t the only piece of bad legislation, violating religious liberty which came out of the D.C. Council in December.

A new bill might force Christian schools to recognize an LGBT student group or host a “gay pride” day on campus.

Here’s how: In a unanimous vote on Dec. 2, the D.C. Council approved legislation that revokes religious liberty protections that Congress passed for the District back in 1989. The Orwellian titled bill—“The Human Rights Amendment Act of 2014”—eliminates an important protection for a key human right: religious liberty.

It does so by rescinding the “Nation’s Capital Religious Liberty and Academic Freedom Act,” popularly known as the “Armstrong Amendment.” The Armstrong Amendment protected religious schools in D.C. from being coerced by the government into “promoting, encouraging, or condoning any homosexual act, lifestyle, orientation, or belief.”

If this new “Human Rights” legislation goes into effect, it will severely infringe the ability of D.C. religious schools to operate according to their religious beliefs. After all, many religions believe that we are created male and female, and that male and female are created for each other. The government should not force religious institutions to violate these beliefs.

The bill hasn’t been delivered to the mayor yet, but when it is Mayor Muriel Bowser can sign it into law, veto it, or allow the bill to go into effect at the end of 10 days. If the bill goes into effect, Congress will have the chance to correct it.

Bowser should veto the legislation: it is bad policy.

The Armstrong Amendment, by contrast, is good public policy. It allows religious schools to make decisions about “the use of any fund, service, facility or benefit… [or] the granting of any endorsement, approval or recognition” to individuals or groups advocating a position contrary to the schools’ beliefs about marriage and sexuality.

Without religious liberty protections, D.C.’s sexual orientation law could force religious schools to recognize and allow funding and use of facilities to groups that advocate positions directly contrary to the schools’ beliefs about marriage and sexuality. This highlights one reason why citizens and legislators should refuse to pass laws that create special rights based on sexual orientation and gender identity. It’s even worse when these laws do not contain protections for religious liberty.

Lawrence J. Morris, general counsel for the Catholic University of America, which would be affected by the change, testified before the D.C. Council earlier this year urging council members to keep the religious liberty protections:

[The Armstrong amendment] recognizes the diversity of our City and the freedom of religious organizations truly to practice what they preach. To remove this protection suggests that there is a role for government in determining how a private, religious, educational institution carries out its mission, the sort of intrusion that flouts our Constitution and our civic traditions.

This measure is fundamentally about the freedom of a religious institution to operate in accord with its deeply held beliefs… government surely cannot be the arbiter of how a religious faith carries out its beliefs, for faith is exercised not just by individuals as they choose to think, pray, or worship, but by groups and organizations – such as our university, whose mission proclaims fidelity to the Catholic Church. And that right of association means not just the right to band together but the right not to be forced into associational relationships with persons whose views are incompatible.

Freedom of association and freedom of contract are two-way streets. They entail the freedom to choose with whom to associate, and when and on what terms. Governmental mandates that force or prevent association violate these freedoms and should be pursued only for compelling reasons when absolutely necessary. Americans are free to live as they choose, but no one should demand that government coerce private institutions to parrot the government’s morality.

CUA was joined by the D.C. Catholic Conference, the Cardinal Newman Society and the Association of Christian Schools International (ACSI) in requesting that the D.C. Council keep the religious liberty protections. The ACSI pointed out the importance of religious freedom and parental authority in education:

Extracurricular activities, outreach and clubs are expected not to contradict the faith message of the school. Parents of students enrolling in Christian schools agree for their children to be educated in conformity with the schools’ religious beliefs, morals and values. In fact, parents choose the schools for that very reason.

Just so. Part of the genius of the American system of government is its commitment to protecting the liberty and First Amendment freedoms of all citizens while respecting their equality before the law. The government protects the freedom of citizens to seek the truth about God, to worship according to their conscience, and to live out their convictions in public life—including the ability to form schools to educate their children according to their own values.

If Mayor Bowser does not veto the D.C. “Human Rights Amendment,” it will be sent to Congress, which will have 30 legislative days to review the policy change. Congress should prevent the bill from going into effect and should restore religious liberty protections in D.C.

In addition, Congress should protect religious liberty at the federal level, and the states should do the same at the state level. Policy should prohibit the government from discriminating against any individual or group, whether nonprofit or for-profit, based on their beliefs that marriage is the union of a man and woman or that sexual relations are reserved for marriage. The government should be prohibited from discriminating against such groups or individuals in tax policy, employment, licensing, accreditation or contracting.

Protecting religious liberty and the rights of conscience is the embodiment of a principled pluralism that fosters a more diverse civil sphere. Indeed, tolerance is essential to promoting peaceful coexistence even amid disagreement. In a nation founded on limited government and religious freedom, government should not attempt to coerce any citizen, association, business or school into celebrating same-sex relationships.