Many Faiths, Common View on Marriage: Men and Women Are Created for Each Other 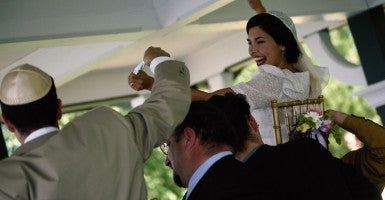 As we prepare to celebrate Thanksgiving, I’m particularly thankful for marriage—both on a personal level and for the critical role it plays in society. Today, my parents will celebrate their 50th wedding anniversary. And last week, I was able to join hundreds from around the world at an International Interfaith Colloquium led by Pope Francis at the Vatican on the complementarity of man and woman.

The Vatican conference brought together speakers from more or less every faith tradition on earth: Catholic, Evangelical, Pentecostal, Mormon, Jewish, Muslim, Buddhist, Hindu, Jain, Sikh and Taoist. The speakers hailed from 23 different countries, representing all the continents inhabited by man. Although the speakers came from many different faiths, they all shared a common view: that men and women are created for each other. The speeches and videos were amazing, and I encourage you to check them out. Here I just want to highlight five presentations:

Pope Francis opened the symposium by noting that “children have a right to grow up in a family with a father and a mother.” He also spoke of an ecological crisis of culture and urged participants to care for their social environments. “The crisis in the family has produced an ecological crisis, for social environments, like natural environments, need protection.” Cardinal Gerhard Muller echoed Pope Francis, saying that “children have a natural, inherent right to a father and a mother to live with them.” This gets it just right: Marriage unites a man and a woman as husband and wife so that children may have the love of their mother and father.

Jackie Rivers, a Doctoral Fellow in African and African-American Studies at Harvard University (where she received her Ph.D.), argued that “black children have suffered the most as a result of the decline of marriage in the black community.” She added:

The deleterious effects of being raised in single-headed households have been well documented. Children growing up in female-headed households experience higher rates of poverty. These children underperform in school: they earn lower scores on verbal and math achievement tests and lower grades in their courses. They have more behavioral problems and higher rates of chronic health and psychiatric disorders. Adolescents and young adults raised without stable families experience elevated risks of teenage childbearing, of dropping out of high school, of being incarcerated, and of being idle (being neither employed nor in school).

And she noted that the current efforts to redefine marriage will only make matters worse: “The unavoidable message is a profoundly false and damaging one: that children do not need a mother and a father in a permanent complementary bond.”

She also chided those taking the mantle of the Civil Rights Movement: “Those who promote what they call marriage equality have unjustly appropriated the language and the mantle of the black struggle in the United States, the civil rights movement. But there can be no equivalence between blacks’ experience of slavery and oppression and the circumstances of homosexuals.”

Russell Moore, the president of the Southern Baptists’ Ethics and Religious Liberty Commission, delivered stirring remarks on the importance of marriage as a natural institution of public importance:

We come from different countries, sometimes with tensions between those countries. We hold to different religions, sometimes with great divergences there on what we believe about God and about the meaning of life. But all of us in this room share at least one thing in common. We did not spring into existence out of nothing, but each one of us can trace his or her origins back to a man and a woman, a mother and a father.

We recognize that marriage and family is a matter of public importance, not just of our various theological and ecclesial distinctive communities, since marriage is embedded in the creation order and is the means of human flourishing, not just the arena of individual human desires and appetites. We recognize that marriage, and the sexual difference on which it is built, is grounded in a natural order bearing rights and responsibilities that was not crafted by any human state, and cannot thus be redefined by any human state.

Moore went on to explain that in “the wake of the disappointment sexual libertarianism brings, there must be a new word about more permanent things, such as the joy of marriage as a permanent, conjugal, one-flesh reality between a man and woman.” He concluded that “we will not capitulate on these issues because we cannot.”

Rick Warren, the famous pastor of Saddleback Church, urged the audience to bear witness to the truth: “A lie doesn’t become a truth and wrong doesn’t become right and evil doesn’t become good just because it’s popular. Truth is truth.” Indeed, promoting truth is the only way to be perennially relevant: “No revolution will last, including the sexual revolution…every lie eventually crumbles under its own deception.”

And the right side is not settled by majority vote: “The dustbins of history are stuffed with conventional wisdom of cultures that proved false, and truth is not decided by a popularity contest.”

Rabbi Lord Jonathan Sacks, the former chief rabbi of the UK, delivered perhaps the most captivating talk of the entire conference. He focused on the revolutionary idea of people being made in the image of God and what it means for families:

That is what makes the first chapter of Genesis so revolutionary with its statement that every human being, regardless of class, color, culture or creed, is in the image and likeness of God himself. We know that in the ancient world it was rulers, kings, emperors and pharaohs who were held to be in the image of God. So what Genesis was saying was that we are all royalty. We each have equal dignity in the kingdom of faith under the sovereignty of God. From this it follows that we each have an equal right to form a marriage and have children.

Sacks also pointed to “a deep connection between monotheism and monogamy, just as there is, in the opposite direction, between idolatry and adultery.” He continued:

Monotheism and monogamy are about the all-embracing relationship between I and Thou, myself and one other, be it a human, or the divine, Other. …From monogamy the rich and powerful lose and the poor and powerless gain. So the return of monogamy goes against the normal grain of social change and was a real triumph for the equal dignity of all. Every bride and every groom are royalty; every home a palace when furnished with love.

But what happens when marriage and family breaks down? Sacks points to the statistics of his own country, where roughly half of all children are born outside of marriage, more than 40 percent of marriages end in divorce and the average length of cohabitation is less than two years:

The result is a sharp increase among young people of eating disorders, drug and alcohol abuse, stress-related syndromes, depression and actual and attempted suicides. The collapse of marriage has created a new form of poverty concentrated among single parent families, and of these, the main burden is born by women, who in 2011 headed 92 percent of single-parent households. In Britain today more than a million children will grow up with no contact whatsoever with their fathers.

This is creating a divide within societies the like of which has not been seen since Disraeli spoke of “two nations” a century and a half ago. Those who are privileged to grow up in stable loving association with the two people who brought them into being will, on average, be healthier physically and emotionally. They will do better at school and at work. They will have more successful relationships, be happier and live longer.

And yes, there are many exceptions. But the injustice of it all cries out to heaven. It will go down in history as one of the tragic instances of what Friedrich Hayek called “the fatal conceit” that somehow we know better than the wisdom of the ages and can defy the lessons of biology and history.

Rabbi Sacks is correct. The injustice of it all cries out to heaven. This Thanksgiving, let’s give thanks for our families, and for those, such as the speakers at the Humanum Colloquium, working to strengthen families everywhere.