Should Pro-Life Organizations Be Forced to Hire Pro-Choice Employees? 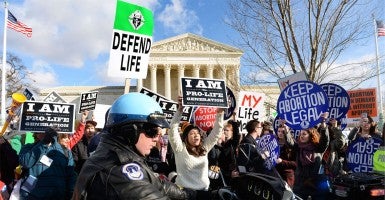 Conservatives are urging Congress to overrule two pieces of legislation that could force religious and pro-life employers in the nation’s capital to do business in ways that go against their beliefs.

The first bill in question, called the Reproductive Health Non-Discrimination Act (RHNDA), seeks to protect individuals from being discriminated against by an employer based on their reproductive health decision-making.

Because the language, as written, provides no exemption for religious or political groups, conservatives argue that it could force employers in the District of Columbia to hire employees regardless of their stance on abortion and religious freedom.

Originally, the bill also required all employers to provide coverage of abortion, but the D.C. Council is in the process of passing a solution that would add a emergency exemption for religious and moral objections.

>>> Commentary: D.C. Passes Bill That Could Force Pro-Life Organizations to Pay for Abortions

Conservative groups argue the proposed emergency exemption—which would only last 225 days—is insufficient. They also say pro-life and religious organizations should be free to make employment decisions in accordance with their beliefs and central mission.

“We can’t exist if our purpose is to advocate for a pro-life position and we’re living under a regime which is telling us you can’t structure yourself as an organization and hire people to advocate for these issues,” Travis Weber, an attorney and Director of Family Research Council’s Center for Religious Liberty, told The Daily Signal. “It’s very controlling and it brings to mind an oppressive government monitoring of groups’ purposes.”

In addition to Family Research Council, Washington D.C. is home to some of the largest pro-life and faith-based organizations in the world, including The Susan B. Anthony List, March for Life, and the Archdiocese of Washington. Conservatives argue this would infringe on the ability of private schools to operate according to their religious beliefs by forcing them to support a student-led gay pride parade despite the school’s stance on homosexuality, for example.

“Religiously-affiliated schools are not only obligated by their religion, but also permitted by the Constitution to freely teach and act according to their faith,” said Michael Scott, Director of the D.C. Catholic Conference, in a written response to the proposal.

But supporters, including Tommy Wells, D-Ward 6, who authored the legislation, argue that discriminating against gay and lesbian people “has no place in the District of Columbia.”

“A law that would allow such discrimination, including of transgender people, must be rejected. I’m proud to say this bill will do that,” Wells said during an Oct. 15 hearing of the Committee on the Judiciary and Public Safety.

On Dec. 2, former D.C. Mayor Vincent Gray, a Democrat, warned that the legislation “raises serious concern under the Constitution and under the Religious Freedom Restoration Act of 1993 (RFRA).” He wrote:

Yet, the newly-elected mayor of D.C., Muriel Bowser, also a Democrat, moved forward with the bills, submitting them to Congress late Friday night for review.

Her office did not respond to The Daily Signal’s multiple requests for comment.

The Constitution grants Congress authority to overrule D.C. legislation with the support of both chambers and the president’s signature.

Congress now has 30 legislative days to pass a Resolution of Disapproval, which, if signed by the president, would overturn the legislation in question.

It is unclear whether President Obama would veto a Resolution of Disapproval, should one reach his desk.

If Congress does not act, the law will go into effect.

In addition to passing a Resolution of Disapproval, Congress has the authority to attach riders to annual appropriations bills, which would prevent taxpayer money from being used to execute the legislation.

The tactic was recently used to stop D.C. from legalizing marijuana.

Both The Heritage Foundation, which is the parent organization of The Daily Signal, and its lobbying arm Heritage Action are urging Congress to address the issue promptly.

“Congress should do this because no governmental entity should force a citizen to promote or pay for abortion, or violate their beliefs that men and women are made for each other in marriage and that sexual relations are reserved for such a union,” wrote Ryan T. Anderson and Sarah Torre, two of Heritage’s leading experts in religion and civil society. “These policies will saddle religious organizations and employers with a choice between complying with coercive laws that force them to violate their religious beliefs and organizational missions and staying true to their beliefs in defiance of unjust laws.”

>>> Read More: Congress Should Protect Religious Freedom in the District of Columbia

Weber said if the current legislation under review moves forward, organizations like the Family Research Council could find themselves in a difficult situation.

“No organization can live up to its purpose and fulfill its mission when that mission is contradictory to a law imposing such coverage and terms on the organization,” Weber said.