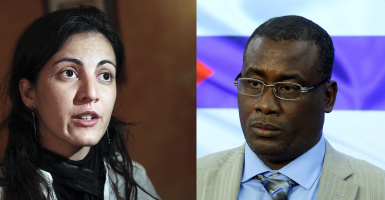 By inviting brave Cuban dissidents as their guests for today’s State of the Union address, friends of Cuban freedom in Congress are casting President Obama in a very unfavorable role—as supporter of their tormentor and dictator, Raul Castro. The island’s dissidents say they feel betrayed by Obama’s move to establish ties with Castro, and their presence will speak volumes.

Sen. Marco Rubio, R-Fla., will bring as his guest Rosa Maria Paya, the daughter of one of the island’s best-known resistance leaders, Oswaldo Paya, who was killed in a 2012 car accident which witnesses and family members said was staged by Castro’s goons.

In a very pointed letter to President Obama after his Dec. 17 decision to establish relations with the Castro government, published by The Washington Post two days later, Paya wrote:

There is nothing new in treating as ‘normal’ the illegitimate government in Havana, which has never been elected by its citizens and has been practicing state murder with impunity. That strategy already has been done by all the other governments without positive consequences for democracy in my country.

House Speaker John Boehner may be scoring an even bigger coup by inviting as his guest Jorge Luis Garcia Perez, who goes under the name of “Antunez.” He spent 17 years in the Castro’s infamous prisons for the crime of opposing the communist regime.

“Obama has allied himself with those who repress our nation and murder our people,” Antunez told the press the day Obama made his announcement. An Afro-Cuban, Antunez will also symbolize the special plight of Cuba’s colored majority, which has been shut out of the small circles of power for 55 years by the all-white communist oligarchy. While Obama invited Alan Gross, the American who spent five years in Castros’ prisons for the crime (under communism) of bringing computers to Cuba’ Jewish community, and whom Obama later exchanged for three convicted spies, it is the dissident guests who will have the long-lasting impact. The presence of the Cuban patriots at tonight’s State of the Union address has historical parallels that will haunt Obama in years to come.

During Cuba’s wars of independence in the second half of the 19th century, patriots such as Jose Marti, Maximo Gomez and Calixto Garcia used the U.S. as a base of operations, raising money and creating support for the cause of a Cuba Libre. History has not treated kindly those who sided with their then-oppressors, the Spanish Empire.

Obama has made clear that he had an eye on his legacy when he broke with 10 previous occupants of the Oval Office by cozying up with Castro—whom Obama now calls “Mr. President.” It isn’t clear, however, that he and his advisors truly understood what this legacy would be, in Cuba and here.