Illinois Abortion Clinics Inspected an Average of Once Every 9 Years 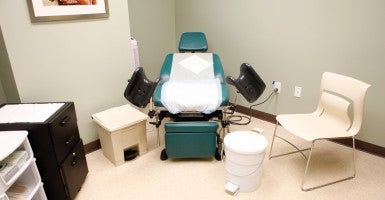 Abortion is legal but not safe in Illinois, says a pro-life group’s new report.

The Illinois Right to Life Committee’s study determined that abortion clinics statewide are inspected on average once every nine years.

Forty percent of licensed clinics went between 14 and 17 years without inspections, according to the report.

And only one of the federally funded Illinois Planned Parenthood clinics, which are not licensed, was ever inspected—in 1999.

Illinois Right to Life Committee executive director Emily Zender told The Daily Signal that Illinois is “setting up women to receive substandard medical care, which is appalling. If abortion should be legal [then] it should be safe.”

Tanning salons and restaurants, by contrast, are inspected annually.

Today, 63 percent of the currently licensed abortion centers have gone between two and three and half years without inspections. But “54 percent of Illinois women’s clinics are unlicensed and have not received a health and sanitary inspection in 14 years.”

54 percent of Illinois women’s clinics are unlicensed and have not received a health and sanitary inspection in 14 years.

The five Illinois Planned Parenthood abortion clinics have settled at least six malpractice lawsuits, including two over abortions that left the women dead.

Another woman who allegedly had a botched abortion at Planned Parenthood “suffered amputation of [her] uterus and cervix.”

In 2011, unhealthy conditions at abortion clinics received national attention when Philadelphia abortionist Kermit Gosnell was convicted of killing three babies at his “house or horrors” clinic, which authorities had repeatedly failed to inspect.

Zender says that the bad publicity prompted the Illinois Department of Health then inspected all 14 licensed facilities.

A total of 193 health and sanitary violations were found in all but one of the clinics.

The Department of Health could not provide any evidence that it informed patients about the unsanitary and dangerous conditions it uncovered.

The report, composed with Illinois Department of Health documents obtained through FOIA requests, proposes a host of reforms. Zender says her top priority is mandating annual abortion clinic inspections. Illinois currently requires the Department of Health to inspect women’s health clinics only “as it deems necessary.”