Leave the SUV, Take the Prius: Obama Warns ‘Gas Prices Are Gonna Go Back Up’ 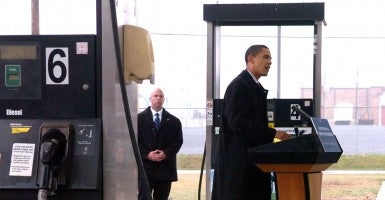 The U.S. economy looks bullish as the price of oil plummets and employment numbers bounce back. But President Obama is advising consumers to be cautious, warning that the price of gas will soon be rising once again.

Speaking to the Detroit News this week, the president offered some financial planning advice.

“I would strongly advise American consumers to continue to think about how you save money at the pump, because it is good for the environment, it’s good for family pocket books,” said Obama.

While travelling to Detroit for a tour of Ford’s Michigan Assembly plant, the president cautioned against returning “to old habits” and warned that when “suddenly gas is back at $3.50, you are going to not be real happy.”

Pres Obama urges audience to enjoy low gas prices, but advises they not buy a gas guzzler "because gas prices are gonna go back up."

“Somehow we have to figure out how to boost the price of gasoline to the levels in Europe,” Chu told the Wall Street Journal.

Today, gas prices hover around $2.15 dollars a gallon nationally. The unemployment rate dipped to 5.6 percent, making 2014 the best year in job growth since 1999.

The investment bank Goldman Sachs predicts that if oil prices remain around $50 dollars per barrel “the economy will add 300,000 more jobs this year,” according to the Associated Press.

Joseph LaVorgna, chief U.S. economist at Deutsche Bank explains, “These lower oil costs are a tax cut for everybody—except the energy producers. It gives us an acceleration in employment.”