Tea Party Is a Movement Now, Not Just a Mood 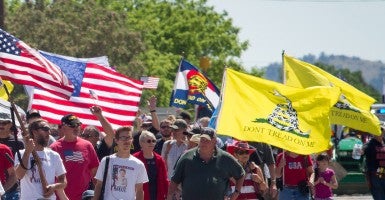 Heath Hansen is a research assistant in the B. Kenneth Simon Center for Principles and Politics at the Heritage Foundation.

Is the tea party a movement or just a mood?

That was the question posed by Weekly Standard columnist and Fox News contributor Steven Hayes as he kicked off a panel at the Heritage Foundation celebrating the 5th anniversary of the tea party.

Hayes and his co-panelists, Heritage Action for America CEO Michael Needham and University of Virginia professor of politics James Ceaser, all agreed that the tea party is in fact a movement. Moods, as Hayes noted, don’t last for five years.

Recent polls regarding national tea party support show the panel’s assessment is correct. An NBC News/Wall Street Journal poll in November found one-fifth of American adults consider themselves supporters of the tea party. As panel moderator David Azerrad of the Heritage Foundation noted, that’s quite an improvement from the original tea party, which numbered between 30 and 130 members.

But the panelists didn’t just rely on poll numbers to support their conclusion. They also highlighted some of the tea party’s major accomplishments since its inception in 2009.

Particularly noteworthy, according to the panelists, is the influence of 2010 tea party candidates such as Sens. Mike Lee of Utah, Ted Cruz of Texas, Marco Rubio of Florida and Rand Paul of Kentucky. The media prefers to focus on failed tea party candidates such as Sharron Angle in Nevada and Christine O’Donnell in Delaware, but it has been Lee, Cruz, Rubio and Paul who have injected new life into the GOP and are producing its most innovative policy solutions.

Another sign of tea party success has been its ability to set the terms of political debates. In particular, Ceaser credited the tea party with “bringing the national debt onto the front burner,” and reminding Americans that “if you spend today, someone will have to pay [for] it tomorrow.”

Tea partiers such as Cruz frequently have caused a ruckus on Capitol Hill fighting spending bills and opposing debt-ceiling increases. The result has often been legislative gridlock. Many on the left and in the mainstream media regard this as a failure of the tea party, but Hayes observed that “that was, in some ways, the entire point of the tea party.”

The tea party-fueled debt debate has had an even greater impact at the state level. In what Ceaser called the tea party’s “greatest actual achievement,” state governments have taken bold steps to rein in public-sector unions and control pensions. And it’s happening in both Republican and Democratic states, Ceaser noted, as both parties are realizing the problems of excessive debt.

That the tea party has made popular a topic as unexciting as government debt indicates how truly influential it is.

Unfortunately, our current Democratic and Republican parties largely have ignored the Constitution and, prior to the tea party, rarely debated its meaning. The result was a mistaken perception of the Constitution as nothing more than “a matter of individual rights protected by courts” that political parties and movements simply should not bother with.

The tea party’s return to the Constitution has revitalized public interest in its meaning and forced politicians to engage once more in constitutional debates.

Despite frequent mischaracterizations in the mainstream media, targeting by the IRS, and verbal attacks from President Obama, the tea party remains highly influential in American politics. The left and the media don’t want to admit it, but the tea party is not a passing mood; it’s a movement. And, as Steve Hayes concluded, “It’s not going anywhere anytime soon.”