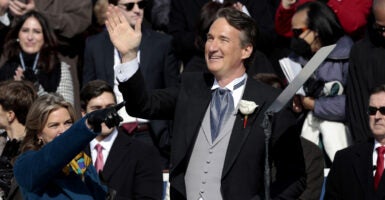 In his first days of office, Virginia Gov. Glenn Youngkin is taking bold action against critical race theory. Pictured: Youngkin is sworn in as the 74th governor of Virginia on the steps of the State Capitol on Jan. 15. (Photo: Anna Moneymaker/Getty Images)

Last year, we witnessed an unprecedented revolt by parents and other Americans against the left’s attempt to insert race-based indoctrination into classrooms and all aspects of life. The election of Glenn Youngkin as governor of Virginia in November was emblematic of this parents-led rebellion, and it looks like the movement will continue at full steam in 2022.

If first steps are any guide, the new governor of the commonwealth of Virginia has fully grasped what brought him to the executive mansion in Richmond. His initial actions, as well as those of newly elected Virginia Attorney General Jason Miyares, have been bold and demonstrate a determination that fits the historical moment.

Winning creates its own momentum, and as the Latin proverb says, “Fortuna audaces iuvat”—fortune favors the brave. Americans and their elected officials will be emboldened by forthright leadership and will reward it.

This feedback loop is exactly what is needed to reverse the strong quick gains made by the proponents of critical race theory on the heels of the monthslong political insurgency that the Black Lives Matter organizations unleashed on the country in the second half of 2020.

Critical race theory holds that racism is systemic in America, therefore the entire American system should be dismantled. Its proponents have been trying to force-feed Americans with this  view through race-based school programs, workplace “training,” and humiliating struggle sessions.

Opposition to the totalizing cultural transformation sought by critical race theory proponents, BLM, etc. began to gather force in late 2020. In an excellent article on what he rightly terms “the counter-revolution,” Abe Greenwald writes, “It didn’t take long for parents of all races to figure out that their children were being indoctrinated into a repellent ideology. Since the implementation of CRT at the school level began, genuine parental resistance to it bubbled up.”

Virginia’s Loudoun County was ground zero for this counterrevolution (I spoke at a parents’ rally there in early June and then in some 25 cities coast to coast, where Loudoun County was referenced again and again), which makes Youngkin’s administration somewhat of a pilot project.

While sitting governors and state legislatures have been active in the fight against the racism of so-called anti-racist measures—Florida’s Gov. Ron DeSantis has been very forceful, for example—the Virginia election was the first major electoral test of the power of parents and Americans who are fed up with this indoctrination.

So it’s important that Youngkin’s very first executive order, signed soon after his inauguration on Saturday, went to the heart of the matter. It said he was “taking the first step on Day One to end the use of inherently divisive concepts, including Critical Race Theory, and to raise academic standards.”

Political indoctrination has no place in our classrooms. The vast majority of learning in our schools involves imparting critical knowledge and skills in math, science, history, reading and other areas that should be non-controversial. Inherently divisive concepts, like Critical Race Theory and its progeny, instruct students to only view life through the lens of race and presumes that some students are consciously or unconsciously racist, sexist, or oppressive, and that other students are victims.

The order prohibits executive employees from “directing or otherwise compelling students to personally affirm, adopt, or adhere to inherently divisive concepts.” It also calls for the superintendent of public instruction to review the “EdEquityVA” program.

EdEquityVA is the collective name for a series of critical race theory-inspired measures, such as “culturally responsive teaching,” which states that school subjects, even math, should be taught differently to members of different races.

Youngkin clearly showed his appreciation for those brave Loudoun County parents by including parent activist Shawntel Cooper and her daughter at the signing event. This showed all of Virginia—and the nation—that one parent can change the course of education for their children.

Miyares, for his part, started his first day in office by firing staff, put at 30 by some reports—in his department’s Office of Civil Rights, including attorneys. He also launched investigations into how the Loudoun County School Board dealt with allegations of a sexual assault at a school—at a time when the board was pretending that its transsexuals policies had not led to any incident—and into the state’s parole board.

“One of the reasons Virginians get so fed up with government is the lack of transparency—and that’s a big issue here. The Virginia Parole Board broke the law when they let out murderers, rapists, and cop killers early on their sentences without notifying the victims. Loudoun County Public Schools covered up a sexual assault on school grounds for political gain, leading to an additional assault of a young girl,” Miyares said.

These are, to be sure, early days. Democrats control the state’s Senate and are sure to try to block the Republican governor’s measures. This could backfire, of course, as when Democrats remained stone-faced and seated when Youngkin called for parents’ involvement in their children’s education during his opening speech.

Everyone will be watching what happens next, but the bold leadership on critical race theory so far is sure to hearten parents who sought to protect their children from harmful ideologues and encourage timid politicians.

Virginians are counting on their newly elected leaders to display the same level of resolve as these parents and use their bully pulpit to clearly explain the importance of passing legislation that will safeguard the commonwealth. The feedback loop has a strong start in Richmond.