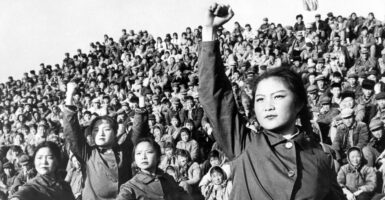 That’s the attitude of radical “woke” activists, who increasingly demand that fellow Americans not only agree with them, but publicly demonstrate their support at all times.

In the videos, a mob appears to be harassing diners and other random white people, demanding they raise their fists or otherwise support the Black Lives Matter movement.

In one video, a woman is surrounded by the mob and screamed at by the protesters.

The Washington Post identified the woman as Lauren B. Victor, an urban planner who lives in the District of Columbia.

Victor said that she was actually a supporter of Black Lives Matter and had participated in protests, but felt like she was under attack by the crowd and didn’t want to be coerced.

“In the moment, it didn’t feel right,” Victor said, according to the Post.

The crowd appeared to be mostly white, though one of the leaders was a black woman, according to The Washington Post.

One of the protesters, Chuck Modiano, is a self-described “justice journalist” for Deadspin, a sports news and commentary website.

This falls right in line with the idea that “wokeness” in America is being generated by an increasingly activist and stridently left-wing media.

The incident was so bad that even Washington’s mayor, Muriel Bowser, who has been a supporter of the Black Lives Matter protests, called it “highly inappropriate.”

She suggested businesses call law enforcement if they are subjected to this in the future. Of course, that might be a little rough if activists get their demand to “defund the police.”

One could write these scenes off as perhaps isolated incidents in a deeply progressive, politically active city.

However, in this summer of protests turned to riots, radicalism, and anarchy, one can’t dismiss how the politics and ideas once confined to small corners of higher education are being injected into the mainstream of American life.

This is the Evergreen College model of social justice deployed off-campus,” Soave wrote. “Readers may recall the infamous 2017 episode involving a progressive professor who was forced to leave campus after drawing the ire of activist students. These students then essentially physically cornered the president of the college and refused to let him leave a meeting until he accepted their demands.”

Now it’s not just college campus speakers being subjected to this treatment, it’s people minding their own business, eating at a restaurant on a Monday night.

This practice of mob shaming has even earlier precedents, of course.

In the Chinese Cultural Revolution of the 1960s, when Mao Zedong’s Communist Party took over the country, one of his tactics was to employ mobs of young people and students to swarm, shame, and harass those of insufficient zeal for the cause.

Victims of this tactic were berated until they admitted they were guilty of class crimes against the proletariat.

These so-called struggle sessions were used to terrorize the entire population into complicity with the communist agenda. All dissent was to be crushed and stamped out.

The radical left has evolved since the days of Mao. Those who oppose their agenda are now guilty of race crimes without sufficient zeal for “anti-racism” as they define it.

And the way they define it looks an awful lot like, well, racism.

The message of these anti-racist mobs is quite simple: Join us or we’ll berate you, refuse to comply and we’ll cancel you.

Given the policy proposals of the anti-racist woke intellectual vanguard, which would essentially strip the individual and civil rights of any who don’t support their agenda, is this really a surprise?

The modern reenactments of Maoist struggle sessions may be limited for now, but they do demonstrate how the thuggish anti-speech culture of college campuses is coming to a city near you.