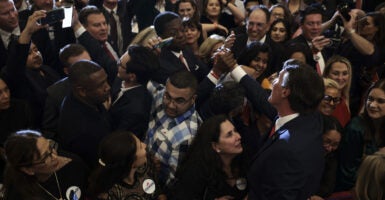 Glenn Youngkin was elected governor of Virginia on Nov. 2 largely due to voters who reject critical race theory in the classrooms. Pictured: Attendees await to take a photo with then-candidate Youngkin at his election night rally in Chantilly, Virginia, on Nov. 2. (Photo: Anna Moneymaker/Getty Images)

Critical race theory proponents have just learned the hard way the folly of their strategy. The American people reject the politicization of the classroom, the office, the military, and the houses of worship that has exploded since the civil disturbances of 2020.

But the lesson cuts both ways. Now, politicians who have discovered they can win on the issue must deliver, or else, too, feel the wrath of the voter. It was the parents of Virginia who pushed Glenn Youngkin, who won his race for the Virginia governor seat Tuesday, to embrace the issue. It is now his job to produce results and give the parents back their authority.

Youngkin inherits a statewide mess created by the previous administration’s embrace of the tenets of critical race theory. In Loudoun County, he inherits a school board that may have committed crimes when it concealed a school bathroom rape, and which for months treated the parents with a haughty demeanor not matched since Marie Antoinette recommended what the peasants should eat.

Youngkin, and all the other politicians who were put into office in Virginia by parents who have had enough, must respond with policy. The implementation of critical race theory violates constitutional guarantees of equal protection for all and the Civil Rights Act’s prohibitions against discrimination. These politicians are now elected officers who must enforce the existing law.

This is a lesson worth learning for those who insist, out of ignorance or malice, that critical race theory is not taught in schools. Nobody was saying third graders are being assigned 9,000-word essays by Derrick Bell—and this silly tactic obviously was a political blunder (as was calling voters racist).

What we are saying is this: Separating children into “affinity groups,” telling black children that certain habits of success (such as studying hard and being punctual) means “acting white,” consigning American workers to struggle sessions not seen since Mao’s Cultural Revolution are all practices that violate Title VI and Title VII of the Civil Rights Act, plus several amendments of the U.S. Constitution. These practices are also racist.

In Terry McAuliffe, critical race theory deniers had their perfect candidate. Not only did he insist on that canard, he told parents the government owned their children, and invited the teachers unions to speak on his behalf. He lost, most ignominiously.

As for the rest of our body politics, they better understand that Tuesday’s election was the start of a new revolution. It was the Lexington and Concord for parents fed up with leftist indoctrination. But it’s worth also understanding the events that led up to this political turning point.

John Adams liked to say that the revolution that mattered took place more than a decade before those bloody battles that opened the American Revolution in 1775. In a letter to his former political foe Thomas Jefferson in 1815, Adams wrote:

What do We mean by the Revolution? The War? That was no part of the Revolution. It was only an Effect and Consequence of it. The Revolution was in the Minds of the People, and this was effected, from 1760 to 1775, in the course of fifteen Years before a drop of blood was drawn at Lexington.

That revolution in the minds of the people took place in the second half of 2020, when the American people recognized that the Black Lives Matter-induced mayhem of that year had led to a bona fide effort to dismantle the United States such as we know it, starting with the minds of the children.

In true American fashion, they stood up and said, “No—not here, not now, not ever.”

Since June 12—when I spoke to about 300 people gathered outside a Loudoun County government building in Leesburg, Virginia, and more than 290,000 who watched online—I have traveled to more than 20 locations in several states coast to coast. I have seen this grassroots movement up close. They come from all races and all walks of lives, are intellectually curious, and are motivated by love of family and country.

The political class had better understand what these Americans are saying and act accordingly.