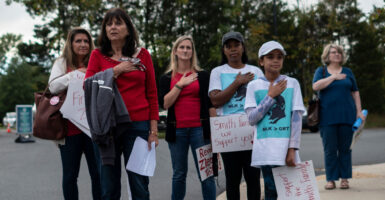 After having their autonomy continuously undermined by school officials, parents in Virginia’s Loudoun County are finally speaking out. Pictured: Supporters of Scott Smith, the father of a student who was raped in a Loudoun County public school, stand as the national anthem is sung to open a Loudoun County Public Schools board meeting in Ashburn, Virginia, on Oct. 12. (Photo: Andrew Caballero-Reynolds/Getty Images)

Who should make decisions about how children should be educated? The obvious answer—consistent with American democratic values—is clear: parents. The alternative is unavoidably tyrannical.

Indeed, the question of who our children fundamentally belong to has come to define our modern political divide.

“I don’t think parents should be telling schools what they should teach,” said Democrat and Virginia Gov. Terry McAuliffe in September. This comment struck a deep chord with parents—particularly in Loudon County, Virginia, which has found itself to be ground zero for this national debate.

In Loudoun County, parents and the school board have clashed over the teaching of critical race theory in public schools, making national news. Virginians consider education to be the second most important issue, just after the economy.

This frustration with the public school system in Virginia has been boiling for a while. It has been the result of a series of cascading events that have challenged the autonomy of parents. Parents started to voice unprecedented levels of frustration with their local school boards when districts abruptly decided that children weren’t going to school anymore at the onset of the coronavirus pandemic.

Parents noticed that the school districts endlessly moved the goal when it came to returning to in-person learning. They also felt that school officials were showing a lack of compassion for parents, who were desperately fighting to save their children from the drudgery of Zoom.

Meanwhile, parents got an unfiltered look into what their children were being taught.

At that meeting, a parent, Scott Smith, was arrested for disorderly conduct. Months later, the Daily Wire broke the story that this man’s 14-year-old daughter was raped in a school bathroom by a boy wearing a skirt to gain access to the girl’s bathroom at the end of May.

Smith later said that he was “confronted and taunted by activists supporting the School Board’s bathroom policy” at the meeting, and during that exchange was tackled by police.

Loudoun County superintendent Scott Ziegler denied that the assault ever took place. Tragically, the offending student was simply transferred to another school, where he went on to assault another student. Smith was understandably outraged, and was arrested after trying to advocate for his daughter.

This was a breaking point for Virginia parents, and the pain of this father was felt all across the country as the story gained national attention. Clearly, there is something seriously wrong with the Virginia public school system—and perhaps the entire public school system in the United States.

Yet, the National School Board Association, instead of acknowledging some wrongdoing on the part of Loudon County Public Schools, issued a warning shot to parents in a now retracted letter to the White House, likening these parents who showed up at their local school board meetings to domestic terrorists. Attorney General Merrick Garland, in a shockingly partisan move, responded to this letter by issuing a memo that the FBI would be investigating these disturbances at school board meetings.

Many parents saw this as a threat, and it’s not hard to see why.

As Virginians engage in a fierce debate over public education, one cannot help but wonder how the public school system became so detached from the will of the parents, whose tax dollars fund the school. And even more to the point, why should parents have to fight an uphill battle to shake off the title of “domestic terrorists” simply for trying to exercise autonomy over their own children?

The answer is that the left has come to embrace the troubling perspective that children are partially owned by the state. In the leftist worldview, the family unit does not have the sole right to determine what values and perspectives children should hold, but that public schools are equal stakeholders in these deeply personal decisions.

Take, for example, a recent op-ed in the Washington Post titled, “Parents Claim They Have the Right To Shape Their Kids’ School Curriculum. They Don’t.” The piece, which gained the praise of The American Federation for Teachers President Randi Weingarten, argues, that the fight for “parental rights” is nothing more than a Republican talking point meant to rally supporters.

The authors of the piece cited the Supreme Court case Pierce v. Society of Sisters, which argues that the state has a vested interest in “public welfare.”

However, as Lindsey Burke, director of The Heritage Foundation’s Center for Education Policy, points out on Twitter, the authors neglected to include perhaps the most consequential assertion in the court’s opinion, “The child is not the mere creature of the State; those who nurture him and direct his destiny have the right, coupled with the high duty, to recognize him and prepare him for additional obligations.”

Indeed, our children in American do not belong to their district assigned school. Parents are not helpless observers that are powerless to the will of education bureaucrats. As the Supreme Court noted, parents have a “high duty” to prepare their children for life, which involved making decisions about how and what their children learn. School boards work for parents, not the other way around. This distinction is fundamental to our democracy.

Particularly in areas where parents do not have options outside of the public school system, due to lack of school choice programs or the inability to afford private or homeschooling, a public school monopoly that dismisses the rights of parents is exceptionally abusive.

Now more than ever, parents must challenge the growing tyrannical power of the public school system and advocate for school choice in every state.