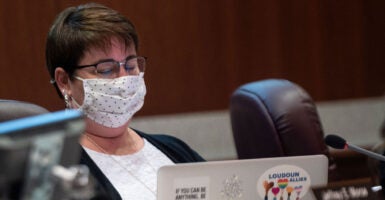 “There is a fire lit every week in Loudoun County on a new topic just to keep the anger flowing,” Brenda Sheridan, chair of the Loudoun County School Board, says. Pictured: Sheridan attends a board meeting in Ashburn, Virginia, Oct. 12, 2021. (Photo: Andrew Caballero-Reynolds/AFP/Getty Images)

Brenda Sheridan, chair of the Loudoun County Public Schools board, criticized parents protesting the use of critical race theory in schools, claiming “[t]here is no rational debate” on the issue.

Sheridan made the comments during an interview with Chuck Todd during the Oct. 27 episode of “Meet the Press Reports,” a weekly podcast.

Despite Sheridan’s denial, parents say there is evidence that principles of critical race theory are being taught in Loudoun County Public Schools. In March, a video leaked of an LCPS teacher asking a student to notice the race of two women in a photograph. The photograph came from a Daily Mail article about fraternal twins.

Sheridan continued to claim that the controversy over critical race theory was manufactured.

“I have to go back to the pandemic. Because it stirred from parents who were very legitimately concerned about schools being closed, and then—so, you had angry parents who I can absolutely empathize with and we wanted to help and we took their kids out of school because we had to. And then—so, you had a group of angry parents and then someone lit the fire with critical race theory, and I truly believe it is to impact elections,” Sheridan told Todd. “There is a fire lit every week in Loudoun County on a new topic just to keep the anger flowing,” Sheridan added.

Loudoun County Public Schools also faced controversy over explicit material in books assigned to students. In addition, parents accused LCPS of covering up a sexual assault that occurred in May, prior to the passage of a transgender policy. The accused student was found guilty earlier this week of the May assault and a second one earlier in October.