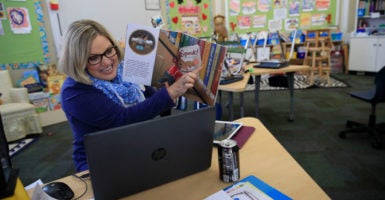 Access to education is foundational to American society and fundamental to the American ideal of providing equal opportunities. Yet amid COVID-19 shutdowns, many children have very limited or even no access to formal education.

That has caused numerous problems for some children, including a loss in learning, an exacerbation of race- and income-based educational gaps, and, according to the American Academy of Pediatrics, increased child abuse and neglect.

There are also added stresses and uncertainties for families.

Taking a holistic view of the situation, the American Academy of Pediatrics issued a new report that advocates opening schools while providing age-based safety guidance.

The APP strongly advocates that all policy considerations for the coming school year should start with a goal of having students physically present in school.

It goes on to note:

The importance of in-person learning is well-documented, and there is already evidence of the negative impacts on children because of school closures in the spring of 2020.

Lengthy time away from school and associated interruption of supportive services often results in social isolation, making it difficult for schools to identify and address important learning deficits, as well as child and adolescent physical or sexual abuse, substance use, depression, and suicidal ideation.

This, in turn, places children and adolescents at considerable risk of morbidity and, in some cases, mortality.

A study from the Netherlands’ National Institute for Public Health and the Environment found that after reopening schools between May 11 and June 8, there have been few reports of infections among employees at schools and no reports of employees who were infected by children.

That’s important information as school districts weigh the health and well-being concerns of children and teachers.

For kids, COVID-19 is far less dangerous than the seasonal flu. That’s not true for older individuals or those with comorbidities.

But while at-risk adults can take measures to mitigate their risks of COVID-19, children are largely helpless against the harms caused by school closures.

Those harms are at least threefold.

At best, it appears students are spending about half as much time engaged in learning, with many engaged for an hour or less per day.

According to a McKinsey report, about half of students live in 28 states that have not mandated distance learning. And even at its best, full-time remote learning will not be the right fit for every child. Some families may prefer virtual learning for the time being, but that should not be the only option.

As Doug Lemov, an expert on effective teaching practices, said, “There’s a limit to how good a lesson can be when you’re trying to interact with your students through a keyhole in the door.”

As the McKinsey report noted:

Even more troubling is the context: the persistent achievement disparities across income levels and between white students and students of black and Hispanic heritage.

School shutdowns could not only cause disproportionate learning losses for these students—compounding existing gaps—but also lead more of them to drop out.

This could have long-term effects on these children’s long-term economic well-being and on the [U.S.] economy as a whole.

Surveys of parents confirm stark differences in experiences with a strong correlation to race and income level.

Some 76% of African American and 82% of Hispanic families say they are concerned they don’t have the resources necessary to keep their children on track.

Third, and most heartbreaking, is increased child abuse and neglect.

School shutdowns mean vulnerable children who are in abusive home environments are spending more time where most neglect and abuse occurs, at a time when economic and health stresses have contributed to more abuse and neglect.

Those children aren’t coming into contact with the teachers and professionals who are the primary reporters of abuse and neglect.

In 2018, there were 3.5 million children who came into contact with Child Protective Services. About 678,000 were determined to be victims of maltreatment, and 1,770 children died of abuse and neglect.

Parents are the perpetrators among 92% of child maltreatment victims; 29% of victims are 2 years of age or younger; and professionals—most significantly educational professionals—are responsible for 67% of all reports of maltreatment. (Friends, neighbors, and family account for only 17% of reports.)

That makes school, child care, and other child well-being service closures a recipe for disaster for vulnerable children.

As a report on child welfare and COVID-19 from the Brookings Institution aptly stated:

COVID-19 has created a perfect storm of factors that will almost certainly lead to a sharp increase in unreported cases of child abuse and neglect, as children are cut off from interactions with professionals and teachers, confined at home with caregivers and relatives, and families are feeling the stress of job loss and economic uncertainty.

The nation’s system of detecting abuse and neglect, which is heavily dependent on reports by teachers, doctors, and other professionals, is rendered almost completely powerless in this new situation as in-person and face-to-face interactions between children and professionals are being minimized by the stay-at-home orders issued by most states.

At the same time, other vital parts of the child welfare system—home investigations, child-parent visits, mandatory court appearances, home-based parenting programs—are now at a near standstill, making it harder and harder for the system to ensure the safety and well-being of the nearly 3.5 million children they come into contact with each year.

COVID-19 is temporary, but many of its impacts will be long-lasting. For children, school closures could have lifelong consequences.

It’s not even a close call. The consequences of extended school closures far outweigh the health risks of COVID-19.

It’s time to reopen schools in person. The current and future health and well-being of America’s 57 million schoolchildren depends on it.