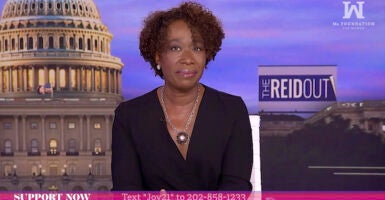 On her MSNBC show, Joy Reid claims that “law school is really the only place [critical race theory] is taught. NBC has looked into everywhere.” Pictured via screenshot: Reid speaks during a virtual event for the 33rd Gloria Awards: A Salute to Women of Vision on May 19 in New York City. (Photo: Theo Wargo/Ms. Foundation for Women/Getty Images)

Max Eden is a research fellow at the American Enterprise Institute.

Proponents of critical race theory are resorting to semantic gaslighting to defend a dogma that most Americans instinctively abhor.

Some pundits claim that critical race theory is exclusively a school of thought taught in legal academia. On her MSNBC show, Joy Reid claimed that “law school is really the only place it is taught. NBC has looked into everywhere.” Former Lincoln Project co-founder George Conway tweeted: “I don’t think critical legal studies should be taught in elementary schools, and I am ready to die on that hill[.]”

The goal is to have the public read something crazy in the newspaper and immediately think ‘critical race theory.’ We have decodified the term and will recodify it to annex the entire range of cultural constructions that are unpopular with Americans.

But words have meaning. Parents and policymakers should understand critical race theory not as conservatives or liberals define it, but as it defines itself. Here’s a definition from a 2001 book, “Critical Race Theory: An Introduction” by Richard Delgado and Jean Stefancic, widely credited as key architects of critical race theory:

The critical race theory (CRT) movement is a collection of activists and scholars interested in studying and transforming the relationship among race, racism, and power. The movement considers many of the same issues that conventional civil rights and ethnic studies discourses take up, but places them in a broader perspective that includes economics, history, context, group- and self-interest, and even feelings and the unconscious. Unlike traditional civil rights, which embraces incrementalism and step-by-step progress, critical race theory questions the very foundations of the liberal order, including equality theory, legal reasoning, Enlightenment rationalism, and neutral principles of constitutional law.

When parents hear terms like “equity,” “anti-racism,” “cultural competence,” “culturally responsive education,” “restorative justice,” “ethnic studies,” “equitable math,” “whiteness,” they would be fundamentally correct to go to a school board meeting and complain about critical race theory. All of these practices are influenced by and have the same politicized purpose as critical race theory, which—to reiterate—defines itself not merely as a “theory” but also as an activist practice.