Pakistani Nation Must Unite Against Terrorists Following Attack on Schoolchildren 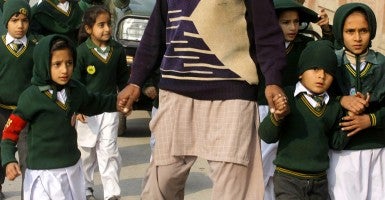 Children are escorted from a school in Peshawar, Pakistan after an attack by Taliban gunmen on on Dec. 16, 2014. Taliban insurgents killed more than 120, mostly students, in a morning terrorist attack on the military-run school in northwest Pakistan. (Photo: UPI/Sajjad Ali Queshi)

Pakistan’s civilian and military leadership must do what is necessary to rid the nation of the Tehreek-e-Taliban Pakistan (TTP, the Pakistani Taliban), the group claiming responsibility for today’s abominable attack on a Pakistani school that left more than 100 children dead.

Nine TTP gunmen stormed the Army Public School and Degree College in Peshawar Tuesday morning, laying siege to the school for more than eight hours and killing around 145, mostly children between the ages of eight and 18. One student who survived the ordeal told reporters he heard a TTP gunmen yell, “A lot of the children are under the benches…Kill them!”

Pakistan is all too familiar with the horrors of terrorism, but today’s assault directed specifically at children represents a new level of depravity by the TTP.

Pakistani Prime Minister Nawaz Sharif has declared three days of mourning and announced an emergency meeting of all political parties for Wednesday. The Pakistani foreign ministry has called the terrorists “enemies of Pakistan, enemies of Islam and enemies of humanity.”

Pakistani politician Imran Khan, who has been leading protests against Nawaz Sharif’s rule, recently criticized the army’s operations in the tribal areas and called on the government to negotiate with the TTP—a position likely to be viewed as reckless and futile by most Pakistanis following today’s dastardly attack.

The Pakistan military has been conducting offensive operations against the TTP in TTP’s hideouts in North Waziristan since June. The operations have resulted in the death of 1,800 militants, according to Pakistani Army officials.

In a visit to the U.S. in late November, Pakistani Chief of Army Staff Raheel Sharif said he was making no distinction between different terrorist groups and had ordered operations against any and all militants in the region. U.S. military officials have confirmed that the Pakistani Army operations in North Waziristan are helping to disrupt the activities of not only the TTP, but also groups that operate in Afghanistan, such as the Haqqani network.

Although Washington and Islamabad have had past differences on how best to counter terrorism in the region, the U.S. must continue to shore up Pakistan with both civilian and military aid in its fight against terrorism.

For its part, Pakistan must respond positively to the olive branch being extended by the leader of Afghanistan’s new Unity Government, President Ashraf Ghani. Ghani has signaled he wants to turn a new leaf in relations and cooperate with Islamabad to counter regional terrorism that threatens both their nations.

Pakistan’s civilian and military leaders must come together to address the existential threat that terrorism poses. Part of this effort must involve undermining the ideology that drives all militancy in the region. Only a comprehensive and consistent policy against terrorism and the ideology behind it will keep Pakistani children safe in the future.