Red States Drop the Ball on School Choice. Here’s Why That Needs to Change. 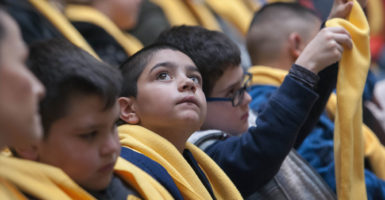 School choice has grown as a policy issue in the last 50 years. (Photo: Eddie Moore/ZUMA Press/Newscom)

Fixing our country’s system of education needs to be a priority, especially for those who have an opportunity to do something about it.

In a speech Monday proclaiming National School Choice Week, President Donald Trump said, “By giving parents more control over their children’s education, we are making strides toward a future of unprecedented educational attainment and freedom of choice.”

The school choice movement was launched when economist Milton Friedman proposed school vouchers in 1955. It has grown in scope and sophistication in the years that followed.

States around the country have enacted innovative programs, and the diversity of options beyond the traditional public school has certainly grown.

However, as impressive as these policy victories have been, reform has moved at far too slow a pace in places where political forces should be aligned to score wide-ranging victories.

It is understandable that school choice has met resistance from ideological opponents and teachers unions that desperately want to maintain the public school monopoly regardless of education results.

What’s disappointing is the lack of urgency to act in states that should be politically favorable to a change.

Though some Democrats certainly have come out in favor of school choice, Republicans generally have been more supportive, at least rhetorically.

This is why it is a disappointment that a huge number of deeply red states passed only minimal school choice programs in recent years, despite dominance at state and local levels of government.

Many of these red states have no programs at all.

Though Texas is known for its Republican leanings and is a frequent example of a good model for red states, it has failed so far on the issue of school choice. In fact, Texas doesn’t have a single private school choice option for parents.

As Lindsey Burke, The Heritage Foundation’s director for education policy, and Inez Stepman, the American Legislative Exchange Council’s education task force director (and also my wife), have noted, the Lone Star State has been dead in the water on education reform.

The two wrote in a paper for the Texas Public Policy Foundation:

The only state in the South without any kind of private school choice program, Texas recently received a disappointing 31st place (out of the 50 states and the District of Columbia) on the Report Card on American Education, published by the American Legislative Exchange Council (ALEC). That relatively low ranking was driven primarily by the state’s continued failure to provide parents with any kind of meaningful private school choice options, which netted Texas an ‘F’ on choice.

According to ALEC’s report card, Texas isn’t the only red state dropping the ball.

Nebraska doesn’t have any private school choice programs, nor West Virginia and Wyoming. Utah, certainly one of the reddest states in the country, has only a limited voucher program. An attempt to expand vouchers in the state fizzled in 2007.

While a majority of states have had Republican-dominated legislatures and GOP governors in the past few years, only a few of these states have used the opportunity to revamp their education systems and bring meaningful school choice options, such as education savings accounts, to students and families.

Currently, only six states have programs allowing for education savings accounts. Only one of those programs, in Arizona, is universal. It’s a nice start, but not nearly enough to change the long-term problems in education.

School choice needs to be treated as more than something on the backburner. American students are not just falling behind in areas such as math and reading, they are increasingly losing touch with American civics and culture to an alarming degree.

It goes without saying that civic literacy is necessary in a republic, but our schools have done a poor job of transmitting these values to the younger generations.

The school choice movement has come a long way since 1955, and has clearly demonstrated that parental choice markedly improves education for young Americans across the board. It’s time to stop grumbling that our schools are leaving younger generations uninformed and make sure that parents will have access to the kinds of education opportunities that will allow us to finally turn things around.