Here’s a Viable Replacement for Obamacare 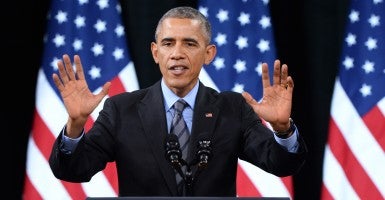 In the wake of Republican mid-term electoral victories, and with support for the president’s health care law registering new lows in the Gallup survey, it is time to consider what a “repeal and replace” strategy for Obamacare might actually look like.

While it is true that the politics and timing remain fluid, it is still possible to outline substantive changes.

At the top of the list would be replacing the Obamacare premium tax credits for exchange coverage with a new health care tax credit design that is broader, fairer and simpler.

Obamacare provides substantial subsidies for buying health insurance but only to individuals who have incomes between 100 percent and 400 percent of the federal poverty level, and only if they purchase coverage through a government-run exchange. Individuals with access to employer-sponsored coverage are ineligible for the new subsidies, and the law fines employers with 50 or more full-time workers if they do not offer coverage. Furthermore, even when someone qualifies for a premium tax credit, calculating the correct amount is absurdly complicated. The amount varies based not only on the recipient’s income but also according to the size of his family and the cost of the “reference plan” in the county of residence. There are more than 3,000 counties in the U.S.

The fairly obvious move would be to replace that complicated design with a uniform tax credit for health insurance available to all Americans. That way those with access to employer coverage could apply the credit to their employer’s plan, and all the employer would have to do is adjust the worker’s tax withholding to reflect the credit. Those who buy coverage on their own simply could authorize their insurer to collect the credit on their behalf and then bill them for the portion of the premium not covered by the credit.

This alternative design not only would be broader and fairer, it would also be much simpler. There would be no need to mandate that employers offer coverage, nor to burden employers with new reporting requirements on their plans and workers—so those provisions could simply be scrapped. There also would be no need for those who buy coverage on their own to use an exchange to determine their eligibility and calculate their credit amount. They could simply buy coverage directly from an insurer or through a broker or website such as eHealthinsurance.com.

Next on the reform agenda should be Obamacare’s insurance market rules. While there were certainly some problems with insurance market regulation, they were relatively modest ones that easily could have been remedied with a few thoughtful and limited changes.

Instead, Obamacare imposed a raft of new regulations. Indeed, some of those regulations are downright counterproductive, such as federal benefit mandates that standardize coverage and rating rules that hike premiums by 30 to 40 percent for younger adults—the very consumers who are the most price-sensitive and the most likely to be uninsured.

Congress should replace Obamacare’s sweeping insurance regulations with a more limited and reasonable set of rules, particularly with respect to guaranteed issue of coverage and pre-existing condition exclusions in the individual insurance market. Doing so would not be difficult, as Congress previously enacted such reasonable rules for employer-group coverage 15 years ago. All Congress needs to do now is what it should have done back then—extend to the individual market the same rules that have proven to work in the group market.

Specifically, under the pre-Obamacare group market rules individuals switching from one group plan to another (or from group coverage to an individual plan) could not be denied new coverage, be subjected to preexisting-condition exclusions or be charged higher premiums because of their health status. Pre-existing-condition exclusions could be applied only to those without prior coverage or to those who waited until they needed medical care to enroll in their employer’s plan. Furthermore, there were limits even in those cases. Such individuals could still obtain the group coverage, and any pre-existing medical condition could not be excluded from that coverage for more than 12 months.

Under these reasonable and balanced rules, individuals who get and keep coverage are rewarded, and only those who wait until they are sick to sign up are penalized. These penalties are neither unreasonable nor severe (anyone can still get coverage and any exclusion or rating surcharge is time limited). As proven by experience with the group market, such rules strike the right balance and create the right set of incentives. They could—and should—be applied to the individual market as well. Doing that also would mean Congress could then safely repeal Obamacare’s individual mandate as well.

Medicaid reform would be the third big piece. Ideally, for the non-disabled poor, Medicaid should be converted into a premium assistance program that gives beneficiaries the option of applying the value of their government subsidy to private coverage of their choice.  That would include an employer plan if a beneficiary has a job that offers such coverage.

While Congress should consider other changes as well, these three are the most significant ones. Enacting them—either collectively or sequentially—would eliminate most of the complexity and confusion engendered by Obamacare, and also avoid the law’s distorting effects on employment and labor markets. They also offer a much simpler, and fairer, path to improving access to health insurance and medical care for all Americans.