More Proof Obamacare Is Increasing Coverage, but Not Access to Health Care 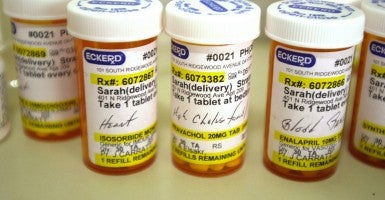 Sarah Stratos of Daytona Beach, Fla., says she is struggling to pay for the nine prescription medicines she has to take everyday. (Photo: Orlando Sentinel/Newscom)

Many of Obamacare’s beneficiaries have already discovered or will eventually discover that there’s a big difference between insurance coverage and access to health care services.

Today, the New York Times highlighted a report by the Department of Health and Human Services that shows access to care in the Medicaid program is very limited.

The study, conducted between July 2013 and October 2013, concludes that more than half of providers could not offer appointments to Medicaid managed care enrollees with 35 percent of providers listed under an erroneous location. Nor were those the only issues, according to the report:

This is neither surprising nor a new conclusion. The Medicaid program has a long and well-documented history of limited access to care and poorer health outcomes for beneficiaries compared to those with private insurance.

But despite these facts, starting in 2014, Obamacare includes a major expansion of the program. In any state that adopts the expansion, the law expands Medicaid eligibility to anyone earning up to 138 percent of the federal poverty level.

Of course, adding millions more beneficiaries into the already broken program will only exacerbate the existing access-to-care issues for Medicaid beneficiaries.

Moreover, the Obamacare-induced access problems are coupled with the shortage of doctors and other healthcare workforce professionals the nation was already expected to face over the next decade. As Amy Anderson, a former graduate fellow at The Heritage Foundation, writes, “The projected supply of workers fails to meet the demand associated with population growth and aging of the population. With the new demand for medical services for the millions who are expected to enroll in Medicaid and the federal and state insurance exchanges, the workforce shortages could become catastrophic.”

This is yet another example of how Obamacare takes America’s health care system in exactly the wrong direction—worsening existing issues instead of properly addressing them.