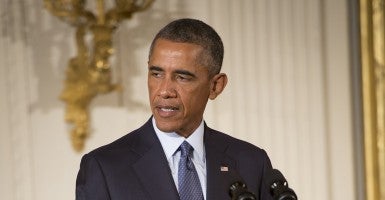 Tennessee is facing a fight over Obamacare Medicaid expansion. (Photo: Under Secretary of the Army PAO/Creative Commons)

NASHVILLE—Tennessee Republicans, after having just increased majorities in the state’s General Assembly, likely will have to decide whether to expand Medicaid in the upcoming 2015 legislative session.

That issue and others are expected to dominate the 2015 gathering, scheduled to begin in January.

State Senate Democratic Caucus spokesman Matt Anderson said last week that, although in the minority, Democrats already are working on their agenda for the upcoming year.

>>> In Year Two, Obamacare Is Off to Another Bad Start

“Expanding Medicaid will be a top priority for all of our members,” Anderson said, in an email. “We’re losing $2.5 million of our own federal tax dollars each day that should be used for people who can’t afford insurance and [to] protect struggling hospitals.”

Interest in expanding Medicaid under Obamacare isn’t lost on the Beacon Center of Tennessee, a Nashville-based free market think tank.

The Beacon Center released a report stating Medicaid expansion would kill more than 67,000 private-sector jobs in the state. The report also said expanding the service would undo whatever economic progress Tennessee has made since the national economy almost collapsed six years ago.

>>> 71% of Obamacare Signups Traced to Government’s Expansion of Medicaid

Beacon Center spokesman Mark Cunningham said the nonprofit is prepared for the fight.

“We don’t believe that this expansion is going to help anybody. We think it doesn’t help the health care problem. It just makes it worse,” Cunningham said. “Instead of fixing the system through privatization or something else, we are expanding a system that is broken. We will fight it, as we think it is really, really bad for the taxpayers of Tennessee.”

Despite gearing for a fight, Democrats in both the Tennessee Senate and House are expected to have even less influence than before.