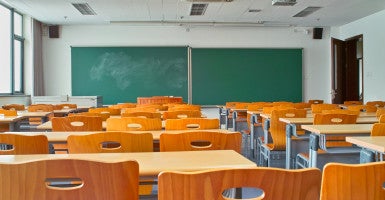 Clay County School District in Tennessee says its financial troubles have increased since the implementation of Obamacare. (Photo: iStock Photos)

Clay County Director of Schools Jerry Strong announced Thursday that all campuses will remain open, despite the school board voting to close all schools in the lower income Tennessee district.

The issue has centered around whether the schools that are struggling with finances close or continue the school year in hopes the school board will find a way to resolve the issue later.

The school administration contends that the budgetary struggles were created by unaffordable government mandates. The Affordable Care Act was “the straw that broke the camel’s back,” Strong told the Associated Press.

When implemented, the Affordable Care Act required the school district to offer an affordable insurance plan to all employees—including non-certified personnel that previously didn’t receive insurance.

According to the Herald-Citizen, the school board had asked the county commission to approve a wheel tax and property tax increase in order to foot the bill for the extra funds, both of which were rejected. Another wheel tax increase has been proposed, however, a vote is not expected to take place until March.

Clay County reversed its decision to close the schools after a lawsuit filed by two parents, Christopher Kane and Tracy Ford, moved to a federal court. The lawsuit questions whether the students “would be denied their constitutional right to equal protection … since other school districts would continue to educate children,” reports The Tennessean.

Director Strong is not optimistic about keeping the schools open. He has stressed that the district’s resources will not last for long and there is still no permanent solution.

“If we spend that, how are we going to put it back … are we just not kicking the can further down the road to make it more difficult later on?” Strong told the Associated Press.

Ed Haislmaier, a senior research fellow in health policy at The Heritage Foundation, speculated as to why Strong cited Obamacare as the reason for closing the schools:

“Certainly there are employers, including cases of school districts, colleges, and universities that have either changed the hours and schedules of staff to accommodate the need to avoid having too many people over the 30-hour threshold.”

“So, to the extent that the 30-hour week threshold above which you have to provide as employer benefits or below which you don’t, there is a cost associated with that—and so there have been people either forced to work more hours than they want or have their hours cut. And we know that’s happened in educational settings as well as school districts. You think about part time staff, say substitutes—or an assistant—or junior faculty at community colleges. So that may be part of what is going on.”

Strong did not immediately return The Daily Signal’s request for comment.