Here’s How America Responded the Morning After #FergusonDecision, in 35 Tweets 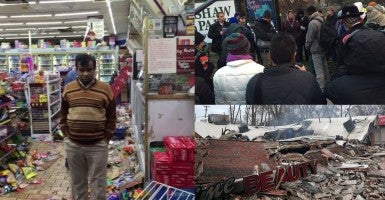 From outrage and insensitivity to prayers and peaceful mourning, Americans woke up to a flood of reactions to the announcement that Ferguson police officer Darren Wilson would not be charged in the shooting death of 18-year-old Michael Brown.

After a long night of protests, some of them turning violent, here is what came of last night’s decision.

Read a full recap of the events related to the shooting of Michael Brown here.

What did he do to deserve this? #Ferguson https://t.co/2joOT7jJPs

Unexpected consequence of #Ferguson: I think I'm done with Obama. Dude had nothing to lose and still couldn't speak from the heart.

African-American owner of Cathy's Kitchen in #Ferguson, who fed protesters for wks, is cleaning up. Customers helping pic.twitter.com/ZF74yz4wOM

Dear #Ferguson protesters So you're surprised nothing changes When u respond like this to decisions you deem unjust? pic.twitter.com/b8IjlNh67r

Walking around #Ferguson this morning is like being in a city after a natural disaster pic.twitter.com/xEO3ClYGD6

But now people of #Ferguson, please explain to me how burning twelve buildings puts you in a better situation today?

Riddle me this: Would you wait until after dark to announce #Ferguson decision if you were trying to PREVENT violence or PROVOKE it?

Sign at Subway… S. Florissant. The morning after. #Ferguson pic.twitter.com/8L2AuXLlSQ

First protest of the day begins at 7 a.m. in Clayton. #Ferguson https://t.co/tPgSwIb3Jh

Change you can believe in in #Ferguson: Looters just sent hundreds of Missourians to the unemployment line.

Who are the protesting against? The Democrat Party? "@sirenidica: The tragic irony of #Ferguson pic.twitter.com/ulDRr2GWcP"

The truth sounds like hate (and racism) to those who hate the truth. #Ferguson #GrandJuryDecision

Hope you're proud of yourselves this morning, #Ferguson pic.twitter.com/0b3AIpgcKo

FYI, the Grand Jury met 25 times, met with 60 witnesses…you can't fault them for their decision. They did what they had to do #Ferguson

Morning protest in Clayton is underway with about 75 people picketing in intersections one after another. #Ferguson pic.twitter.com/1Yb3hpbpQc

#Ferguson isn't just about one cop and one kid. It's also about the implicit bias the plagues us all, everywhere, that we need to address.

If the media focus on violent protests, there's usually a peaceful majority they don't want you to see. #Ferguson https://t.co/fT5sFVVn9s”

Emotional prayers at the clergy-led action at Shaw Park in Clayton #Ferguson pic.twitter.com/MPVk45Ihxx

wow RT @MrPooni: While CNN runs footage of #Ferguson burning, this is happening on the steps of the US Supreme Court https://t.co/1D7FyMh1xx

Someone should start a fund to help all the #Ferguson small business owners with repairs and rebuilding.