5 Problems with the Nuclear Talks with Iran 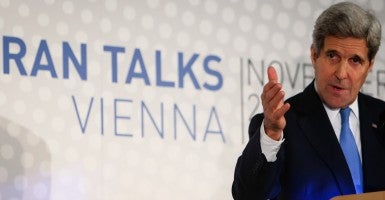 The Obama administration was forced to punt once again at the talks on Iran’s nuclear program when the Iranians refused to budge on their maximal demands on uranium enrichment and sanctions relief.

When they failed to strike a deal by Monday’s deadline, Iran and the P5 +1 (five permanent members of the U.N. Security Council plus Germany) extended the negotiations for another seven months, until June 30, 2015.

There are five major problems with the negotiations, as currently structured:

1. Iran has been able to legitimize its once-covert nuclear program.

Tehran has won the acceptance of the P5 + 1 for illicit uranium enrichment activities at Natanz and the heavy water reactor at Arak, capable of functioning as a plutonium bomb factory, that Iran sought to hide from International Atomic Energy Agency inspectors before they were exposed in 2002. Other nuclear proliferators will demand the same lax treatment if they are caught red-handed in the future.

Tehran has pocketed significant economic benefits from sanctions relief, about $700 million per month, as part of the interim Joint Plan of Action. As the chairman of the House Permanent Select Committee on Intelligence, Rep. Mike Rogers, R-Mich., has noted: “The Obama administration’s Iran nuclear negotiations have done little to advance the security of the United States and our allies, but they have benefited Iran. As these negotiations drag on, Iran continues to enrich uranium, is free to pursue some nuclear-related R&D, and has been handed access to previously frozen assets and an easing of sanctions. At the same time, the United States has received little in return but a promise to keep talking.”

3. Iran has been rewarded for stalling and stretching out the negotiations.

The Obama administration came into office believing that Tehran would respond more to carrots than to sticks. But Iran pocketed the carrots and has refused to dismantle any of its nuclear infrastructure, while the administration has abandoned long-held positions calling for a halt in uranium enrichment, full cooperation with the International Atomic Energy Agency investigation and the dismantling of the Arak heavy water reactor. Tehran continues to stall on concessions, convinced it will get a better deal. Iran has achieved its immediate goal, sanctions relief, without compromising on its long-term nuclear capacity or abandoning its nuclear weapons option.

4. Iran has refused to fully cooperate with the IAEA in its investigation of possible military dimensions of Iran’s nuclear program.

Twelve years after it was caught cheating on its nuclear nonproliferation obligations, Iran still has not fully cooperated with the IAEA investigation into its nuclear activities. It continues to block IAEA inspectors from visiting the military base at Parchin, where it is suspected to have experimented with explosives for a nuclear warhead. Full cooperation is necessary to gauge the progress Tehran has made in warhead design and should be an absolute prerequisite of any future agreement. If Iran will not come clean on its past activities, how can it be trusted to fulfill future commitments.

5. Iran has a strong interest in prolonging the negotiations as long as possible.

The Obama administration made a critical mistake in easing sanctions so much at the outset of negotiations, which relieved pressure on Iran to make concessions. Thanks to sanctions relief, Iran’s oil exports have grown from 1 million barrels per day before the Joint Plan of Action to 1.4 million barrels per day, adding about $10 billion to Iran’s annual oil revenues. The Iranian economy grew by an estimated 4.6 percent in the first quarter of Iran’s calendar year, the first time it has grown after shrinking for the last two years under sanctions. U.S. officials have admonished the Iranians that they need to make fundamental decisions about their nuclear program if they want to be reintegrated into the world economy. But Tehran is intent on having its cake and eating it too. It is going through the motions of negotiations while rejecting any restrictions that would foreclose on its nuclear weapons option. Meanwhile, it continues to enrich uranium, develop more advanced centrifuges and prepare the Arak reactor for plutonium production.

The Obama administration must reject any deal that would legitimize Iran’s expanding nuclear infrastructure and allow it to gain nuclear weapons. Such a deal would jeopardize U.S. national security, distress U.S. allies and invite a bipartisan congressional backlash.

Instead, the administration should work with Congress to ratchet up sanctions on Iran if it fails to agree to verifiably halt its uranium enrichment efforts and fully cooperate with the IAEA investigation by the June 30th deadline or if it cheats on its obligations. This would make it clear that Iran will be worse off if it continues to block an acceptable outcome in the nuclear negotiations.

See: Nuclear Negotiations with Iran: U.S. Must Avoid a Rush to Failure