The Best Photos of the USS George H.W. Bush’s Homecoming 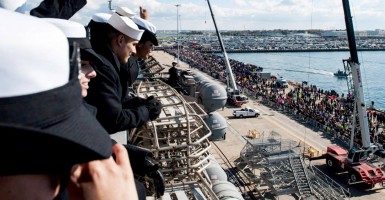 The strike group, which includes an aircraft carrier named after the 41st president, carried out the first airstrikes in Iraq in early August, steamed a total of 73,400 nautical miles and was the first on the scene providing U.S. combat capability over Iraq to fight the Islamic State, also known as ISIS.

Family and friends greeted the crew with open arms and heavy hearts over the weekend. Here are some of our favorite photos from the homecoming. My son happy homecoming from deployment on the USS H.W. Bush! pic.twitter.com/VEcAbJQaZQ