Drones Are High-Tech Marvels, but Congress Needs to Address the Threats They Pose 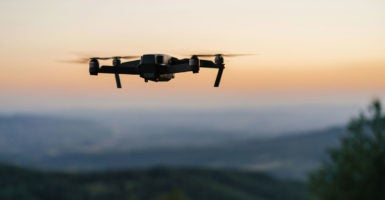 As symbols of a new, high-tech era, drones have grown in popularity, largely because of their versatility.

The U.S. military utilizes them to hunt down terrorists overseas. Companies such as Amazon have looked to employ drones as delivery machines. Photographers use them to capture bird’s eye images. Children ask for them as birthday presents.

While the proliferation of drones has economic advantages, it also poses a threat.

For example, ISIS utilized and weaponized drones to collect surveillance and attack its adversaries. Drones also have been used to smuggle drugs and cellphones into prisons. An unauthorized drone crashed onto the White House lawn. There is also potential for drones to attack and take down aircraft.

Drones afford bad actors a potentially easier way to attack government buildings, critical infrastructure, and public events. As such, it’s vital that the U.S. government have the capability to neutralize any drone that poses a threat.

Experts at The Heritage Foundation on Monday released a paper detailing the need to establish a legal framework for counterdrone technologies.

The paper notes that congressional action was taken in the 2017 and 2018 National Defense Authorization Acts, when limited counterdrone authorities were granted to the departments of Defense and Energy.

However, more needs to be done.

One of the new reports’ recommendations is that federal law enforcement agencies, such as the departments of Homeland Security and Justice, be given counterdrone authorities.

To do that, exemptions to regulatory prohibitions on the manufacture, marketing, and sale of counterdrone components should be granted to developers.

The report also suggests that Congress codify safeguards for civil liberties and require the development of counterdrone rules of engagement.

Congress should also task the Department of Homeland Security with creating a pilot program that would allow the department to enter into agreements with state and local partners to use a wide array of approved counterdrone technologies to defend potential targets ranging from state capitols to state fairs. That would allow state and locals government to defend them when federal law enforcement agencies are not present.

That pilot program ought to begin after federal law enforcement has figured out its counterdrone rules and policies, and it would help set the stage for the necessary adoption of counterdrone technology by state and local officials.

Earlier this month, The Washington Post got a hold of a draft counterdrone proposal being developed by the Trump administration.

According to the draft, the administration is proposing that the same powers and parameters given to the departments of Defense and Energy in the 2017 and 2018 National Defense Authorization Acts should be given to the Homeland Security and Justice departments. That largely lines up with the approach recommended by the new Heritage report.

Drones are powerful tools that offer benefits, but they also present threats. It is up to Congress to expand the ability of U.S. agencies to neutralize these threats through counterdrone technology.