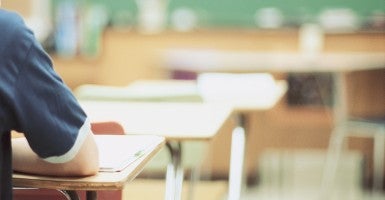 Last night’s election results have seismic implications for education policy at both the state and federal levels. Voters sent a message that school choice and local control are important to them.

David Figlio of Northwestern University, who has evaluated the scholarship program on an annual basis for the state, found that “scholarship students are by and large the ones who struggled the most at the public schools they left behind, but that they are now, on average, making the same academic gains as students of all income levels nationally.”

Scott’s victory is a victory for supporters of school choice in the Sunshine State.

Similarly, in Wisconsin, Republican Scott Walker won his re-election bid for governor running, in part, on a platform of expanding school choice. His goals were in sharp contrast to that of challenger Mary Burke, who opposed school choice. It also appears Wisconsin voters approve of Walker’s efforts over the years to limiting collective bargaining for public employees and give teachers a choice in whether they join a union.

There also are more school choice supporters in state legislatures in places such as Tennessee and also Nevada, where Republicans took control of the state senate and house for the first time in decades. As the Reno Gazette Journal reported:

“Some legislation that was not seriously considered by a Democratic majority—like construction defects, private-school vouchers, ending prevailing wage standards on public building contracts and reforms to the state’s Public Employee Retirement System—would probably be considered.”

In Illinois, school choice also was a major plank in the platform of Bruce Rauner, the Republican who upset Pat Quinn in the state’s gubernatorial race. Rauner is interested in establishing innovative education savings accounts.

Voters resoundingly sided with candidates who both rejected Common Core national standards and tests and promised to restore state and local control of education.

Two races for state superintendent were particularly notable in this regard: In Arizona, Diane Douglas, who ran explicitly on an anti-Common Core platform, appears to have clinched the position. As Politico noted, “Her victory would be a huge win for the anti-Common Core movement.”

Richard Woods, who will become Georgia’s new state superintendent, also campaigned on an anti-Common Core platform and has pledged to work to create Georgia-based curriculum standards.

And in South Carolina, which withdrew from Common Core earlier this year and already has planned to write its own standards, Molly Spearman, an anti-Common Core candidate, won her bid for state superintendent.

The potential for Arizona and Georgia to reject Common Core and forge a new path forward is particularly notable.

The Arizona Republic acknowledged that “voters were voicing their opposition to Common Core standards, [Douglas’] key issue in the campaign.” And Doug Ducey, who was elected governor of Arizona yesterday, has said the state can do better than federally funded standards, which should not be imposed from the top down.

Momentum against Common Core has been mounting. Already this year, four states—Indiana, Oklahoma, South Carolina and Louisiana—withdrew from the national standards and tests, and more than a dozen others either have exited or downgraded their involvement with the assessment component.

Sen. Lamar Alexander, R-Tenn., will take the helm of the Senate Health, Education, Labor, and Pensions Committee and is likely to work to reauthorize No Child Left Behind. Although Congress should pursue policies that would allow states to completely opt out of No Child Left Behind, as the Academic Partnerships Lead Us to Success, or APLUS Act, does, a potential reauthorization of NCLB would provide an opportunity to move the nation’s largest K-12 education law in a more student-centered direction.

Sen. Tim Scott, R-S.C., already has introduced the CHOICE Act, which would allow states to have Individuals with Disabilities Education Act funds follow children to the private schools of their parents’ choice. Rep. Todd Rokita, R-Ind., has introduced a companion measure in the House. A similar approach to Title I funding for low-income school districts also has been advanced in the House by Rep. Luke Messer, R-Ind.

Options such as allowing Title I portability—letting the money follow students in low-income schools to schools of choice—would be an important component of any potential No Child reauthorization, and IDEA portability is something Congress could tackle separately.

Finally, Congress now has the opportunity to actually address the college cost crisis through reforms to accreditation. This is one of the biggest opportunities conservatives have to advance transformational education policy in the coming year.

The Higher Education Reform and Opportunity Act—or HERO Act— introduced by Sen. Mike Lee, R-Utah, and Rep. Ron DeSantis, R-Fla., would empower states to allow any entity to credential courses, which could pave the way for a more flexible college experience for students and make possible a dramatic reduction in college costs.

The proposal would allow states to establish flexible accreditation models that would infuse a level of customization in higher education not possible under the existing accreditation system.

Accreditation reform is long overdue. By enabling states to take the lead on accreditation, the HERO Act creates a promising way to drive down costs and increase customization and opportunity in higher education.