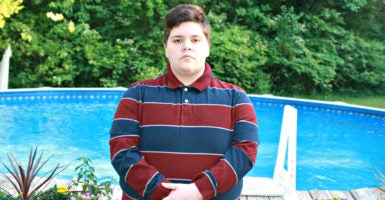 Gavin Grimm, 17, who was born female but identifies as male, was barred from using the boys' bathroom at a high school in Gloucester County, Virginia. (Photo: Crystal Cooper/ACLU of Virginia/Newscom)

The U.S. Supreme Court will decide whether a federal order requiring public schools to allow transgender students to use the bathroom corresponding to their gender identity is lawful.

The case before the Supreme Court originates in Gloucester County, Virginia. The high court agreed Friday to hear it, granting review on two legal questions.

The Obama administration’s directive advised that the U.S. Department of Education read Title IX, the section of the federal code concerning gender discrimination in education, to include transgender individuals—meaning a school may not discriminate against them in any way.

Some school districts across the country have ignored the order and set their own policies, arguing the administration does not have the authority to issue such a rule. Some states, led by Texas, challenged the order in federal court; a federal district judge in Texas sided with them and blocked the order.

The case arose when Gavin Grimm, a 17-year-old student in the Gloucester County public school system who is transgender, sought to begin using the boys’ bathroom.

Though a district court sided with the schools, the U.S. Court of Appeals for the 4th Circuit ruled for Grimm, finding that the courts must defer to Department of Education guidelines requiring schools to treat students consistent to their gender identity to comply with Title IX.

The Supreme Court justices must determine whether an unpublished agency letter that itself does not carry the force of law is subject to “Auer deference,” and also whether the department’s interpretation of Title IX will stand.

Auer deference is a legal doctrine requiring the courts to defer to an agency’s interpretation of its own regulation. The court also was asked to revisit the 1997 Auer ruling in its entirety, but declined to take up that question.

“The Supreme Court has the chance to rein in an executive branch that has once again gone around our laws and the will of the people in violation of the Constitution,” Roger Severino, director of The Heritage Foundation’s DeVos Center for Religion and Civil Society, said in a release by the think tank.

Severino noted that the Department of Education determined that it is discriminatory to reasonably accommodate transgender students with private facilities:

Incredibly, the 4th Circuit Court of Appeals said it was required to defer to the administration’s backward and bizarre rewriting of the law and effectively handed its gavel to the Department of Education.

Across America, schools have been able to address student concerns sensitively and fairly. The last thing they need is a one-sided mandate from the federal government that jeopardizes student privacy.

A date for oral arguments has not yet been set.

In the absence of a ninth justice, the court has declined to schedule arguments in major cases on which they are expected to split along ideological lines. It is possible, then, that the case will not be argued for the foreseeable future.

This report was updated to include the comments from Roger Severino.