Maryland Republicans on Lookout for Voting Machines That ‘Flip’ Democrat 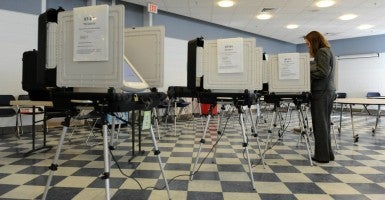 Kerry August can debunk any excuse an election judge may have for why her votes switched from Republican to Democrat right before her eyes: Her hands are tiny, her nails aren’t long and she definitely didn’t vote with an elbow.

It’s a situation voters across Maryland found themselves in as they voted early in midterm elections formally held today.

“There’s been a boatload of problems in Maryland in various counties,” August told The Daily Signal, adding: “They say your fingers are too big, your nails are too long, you vote with your elbow or something. There’s people complaining down there.”

Officials with the Maryland Board of Elections say reports of flipped votes — consistently from Republican to Democrat, perturbed voters say — stem from calibration issues with some machines.

Election officials say voters who encounter “vote flipping” issues today with their voting machine should notify an election judge and clear any incorrect votes. The judge should move the voter to a new unit and either shut down the machine or call a technician to check it.

Here’s what August says happened next:

She approached the touch-screen computer and began moving down the ballot to make her choices. At about the third vote, she noticed her selection highlighted a Democrat even though she had picked a Republican. She double-tapped the screen, correcting her vote, and continued.

When August got to the next vote, though, the machine again selected the Democrat instead of the Republican. It took her three attempts before she could select the correct candidate.

August caught the attention of an election judge and explained the situation. She told the judge the machine should be taken out of service because of its repeated malfunctions. The judge replied that the voting machine was simply old and told August to “work with” the unit.

Dissatisfied with that response, August asked to speak with the chief judge at the polling place. He gave her the same answer. She asked him to remain near as she cast her final vote.

When August selected the last candidate, the machine again highlighted the Democrat and not the Republican she had picked.

The election judges at the Chevy Chase poll told August they would take the machine out of service until it was fixed. She later learned it had been reactivated and put back into use.

“I thought it was appalling that’s how they handled it,” August told The Daily Signal. “They were extremely polite, but condescending, and they told me a lie. They said it was going to be taken out.”

Because August noticed the discrepancies before submitting her ballot, it wasn’t officially cast.

Mary Beth Phillips of Gaithersburg, Md., had a similar experience when she, too, went to vote early in Montgomery County.

Phillips and her husband headed to the Activity Center at Bohrer Park on Thursday and were immediately told to turn off their cell phones before entering the polling place. Maryland prohibits the use of cell phones in polling places.

After obliging, Phillips and her husband went to their respective voting machines. Phillips didn’t encounter any issues as she cast her votes on the first page. However, when she selected the Republican candidate for state senator at the top of the second page, both the Republican and the slot for a write-in candidate disappeared, leaving only the Democrat on the screen.

Phillips immediately notified a poll worker, who asked her to select the Democrat and see if the other choices reappeared. They did, and Phillips successfully cast her vote for the Republican.

The poll worker didn’t give any explanation for why the names of certain candidates would disappear from the ballot, Phillips told The Daily Signal.

“I was kind of shocked at what I’m hearing this year,” Phillips  said. “I’ve just been warning friends, telling them to watch it, and look at each vote before you cast it.”

Data provided to The Daily Signal by the Board of Elections show that 10 machines in seven counties — Anne Arundel, Cecil, Dorchester, Frederick, Harford, Somerset and Wicomico — were removed from service during early voting because of “vote flipping” and “calibration issues.”

Montgomery County is not among the listed counties where machines were taken out of service.

Donna Duncan, assistant deputy for election policy for the Board of Elections, said the calibration problems can occur when the spot registering the vote doesn’t align with the selection on the screen. However, she stressed, voters who reported “vote flipping” were able to correct the problems.

Generally, Duncan said, the machines are taken out of service — although that apparently didn’t occur in August’s case.

In Queen Anne County, Sheriff Gary Hofmann noticed his votes “flip” too. According to the Board of Elections data, though, no machines in Queen Anne have been removed from service.

“This is happening here as well,” Hofmann, a Republican, told Watchdog news service. “It occurred on two candidates on my machine. I am glad I checked.”