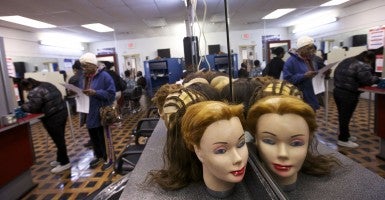 You may know who you’re voting for this Election Day, but do you know where? Maybe you’re voting in a library or your City Hall. Maybe you’re heading to your kids’ school. But if you’re lucky, you might be able to multi-task a hair appointment or grocery shopping trip with your civic duty.

Yes, thanks to brief guidelines and an emphasis on easy access set by the U.S. Election Assistance Commission, you might even cast your vote in a neighbor’s garage.

Here’s 17 of the most random (and surprising) polling places in the United States today: An Alaskan voter arrives to a polling station to cast her ballot before sunrise. (Photo: John Moore/Getty Images) Voters check in at The Coco’s Bakery. (Photo: Newscom) A voter casts her ballot at a laundromat. (Photo: Mark Cowan/Newscom) Voters cast their votes at the Echo Park Deep Pool being used as polling place in Los Angeles. (Photo: Newscom) Pat Molloy casts his ballot in the midterm elections at a polling place located inside the Family Thrift Store in Chicago. (Photo: REUTERS/John Gress/Newscom)