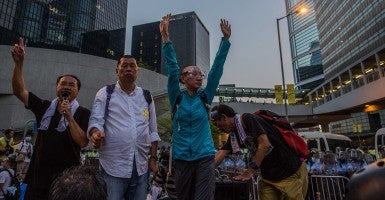 In mid-October, during the peak of the democracy protests in Hong Kong, decidedly different demonstrators congregated outside the printing plant of Next Media, publisher of the Apple Daily newspaper.

These demonstrators called for the fall of Jimmy Lai, the outspoken founder of Apple Daily, a pro-democracy newspaper despised by the ruling establishment in Hong Kong and China’s central government in Beijing.

The pro-Beijing demonstrators, who were annoyed by the ongoing democracy protests, blocked Apple Daily’s delivery trucks from leaving the printing plant, delaying distribution of the newspaper.

Covering the protests in Hong Kong has not been enough for Jimmy Lai.

Lai and Apple Daily have been vocal and active in support of the protest movement.  Lai has even been seen hanging among the mostly student protesters.

A little more than a month after the pro-democracy protests began — with no end in sight — Lai corresponded with The Daily Signal in an email interview.

In the Q&A below, Lai, an entrepreneur who also founded Giordano, an Asian clothing retailer, describes the challenge of reporting on the Hong Kong protests and predicts a democratic future for his adopted city.

The Daily Signal: A month into the protests, what do you see as the factors still driving them? What must the protesters do to achieve their goals?

Lai: One objective in the heart of the young people is that they don’t want to live their life with their heads down.

So either they fight their utmost to have true universal suffrage, or, if at the end they fail, they leave and migrate to somewhere where they share the same universal core value.

Q: You were born in China. You escaped to Hong Kong at age 12 and started a newspaper. Why did you go to Hong Kong? How “free” is the city compared to how you envisioned it might be?

A: [We came] because of our family background and bad pedigree in the eyes of the Communist regime. We were treated like animals in China. With my whole life in front of me so bleak, I had to escape. When I escaped from China and came to Hong Kong, the contrast was that China was like hell and Hong Kong, like heaven.

Though I was very poor, I smelled the air of freedom and was full of hope for the future. That’s the way I thought heaven is.

Q: What are the challenges related to running a pro-democracy newspaper in Hong Kong?

A: Just to stand firm and don’t treat it just as a business. You run it with your own conviction. In this way, no pressure or temptation can erode your stand. And besides, it feels great to be doing the right thing.

Q: What has been the strategy for Apple Daily’s coverage of the protests? With China blacking out media coverage on the mainland, do people there find ways to read your coverage?

A: Just to be on the right side. The right side is the future that these protesters are fighting for. We fight together with them.

People inside China can read [Apple Daily] by using proxies.

Q: Behind the scenes, how do Hong Kong’s tycoons feel about the protests? Why are they not more involved?

A: They’re annoyed by it. Because to them, democracy means free lunch. They don’t want it.

Q: Your paper also publishes in Taiwan. What has been the reception in Taiwan to the protests? Why is the democracy movement in Hong Kong important to Taiwan?

A: We have received positive response from the Taiwanese. But the response has been tepid.

>>> Hong Kong’s Former No. 2 Official Fields 7 Questions on the Future of Her City

They don’t believe a whit of it anyway, so Hong Kong’s Umbrella Movement has little impact on them.

Q: You have been the subject of legal, personal and physical attacks from China due to your pro-democracy views. How do you deal with that abuse? Does it ever discourage you?

A: When you have a firm conviction, those [attacks] are just a nuisance that can’t hurt you. No, I’ve never been discouraged. Actually this movement has encouraged us. We know we’ve done the right thing all along. This movement gives us the greatest career reward.

Q: Why do you still have hope for Hong Kong?

A: This movement gave me hope. These young people’s steadfast fight for their future can move mountains. If we keep this civil disobedience peaceful as it’s been, I think we have a chance to get something back.