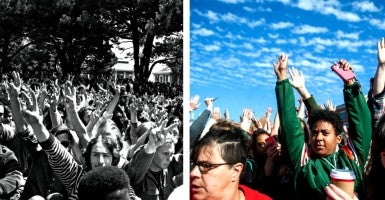 Left: Protesting students at the University of California in 1969. Right: Protesters raise their arms to block media from taking photos during the Concerned Students 1950 protest at the University of Missouri on Monday, Nov. 9 2015. (Photo: Left - Underwood Archives/UIG Universal Images Group/Newscom Right - Michael Cali/TNS/Newscom)

Recent student protests, which began at the University of Missouri and at Yale, are likely to spread across the country, given the reactions of both universities’ administrations.

Could Yale be a safer place?

Not only is there basically no crime on the Yale campus, but there are 86 full-time police officers on staff. The dining halls are fabulous, with meals tailored to a student’s unique dietary needs. Students frequently, I am told, walk around campus after dark.

Even if hearing a conservative thought is the genuine threat, there are not many on the Yale staff.

Their grades probably reflect the affirmation that students feel they deserve, since over 60 percent of grades at Yale are As. If it is so bad, who is forcing these children into the Ivy League?

These students appear to conservative critics as coddled, fragile, unable to handle the world around them. We should not be taken in by their claims.

Could any university president stop a fecal swastika? Should any president care? These scandals, which the students are protesting, appear to be about nothing. These students should be ridiculed, rather than pandered to.

Taking the Students Claims Too Seriously

Recognize, however, that such ridicule takes their claims to be unsafe too seriously and misses the important motive that these students have.

Hitting administrations with healthy doses of liberal guilt, these students are conducting power plays to squeeze more and more concessions out of administrations.

What the students are asking for is, of course, pitiful and bureaucratic.

Perhaps a greater nod to diversity in the college curriculum and a less demanding path to a degree?

These students do not even know that they are not committed to receiving an education because they do not know what an education is. Like so many of their professors, they are committed to power politics more than the life of the mind.

Their complaints are sure to escalate to matters that affect politics beyond the walls of their universities.

The ignorance of these students combined with their political ambitions cannot coexist with a genuine education. Students know what they can get away with among their professors and the administrators.

In fact, it is as if the students want to be the inmates running the asylum in the battle between different gangs of inmates.

The students—Bolsheviks in a hurry—have the moral high ground against the time-serving, tenured radicals.

What Should the Reaction Be?

While conservatives greet this mess with a certain understandable glee as different sets of radicals turn on each other, we should accept neither the students’ interpretation of their unsafe environment nor the cowardly reactions of the administrators.

Let us praise administrators who see their mission as protecting the Western tradition or even preparing students for jobs in the 21st-century marketplace. If there are any such left, let us back them if they stand up, show that they do not take the students’ claims at all seriously, expel the bullies, and—I say this as an ardent college football fan—fire the appropriate football coaches.

These student radicals should be made to feel unwelcome.

This seems to be the battle of the late 1960s playing out again, but at least the claims of those students were clear, and their complaints pointed to a complete gutting of what was in reality a not so bad curriculum. These protests are about nothing but power.