Student Protesters React to Paris: ‘Pay More Attention to Us’ 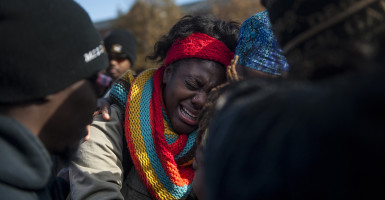 Millions of people worldwide were horrified to learn that Paris had been attacked by terrorists. But some supporters of the student protests at the University of Missouri had a unique reason for their dismay: outrage over what had happened in France was taking the spotlight off their grievances.

Never mind that the protests at Mizzou and other campuses had dominated the news for days at that point, right? Or that a large-scale terrorist attack on a major American ally that had claimed more than 100 lives just might be a tad more important than still more footage of signs and chants? Talk about self-centered.

If they were smart, they would have welcomed the distraction. Because the generous media attention already given to the protests at Mizzou, Yale, and other institutions of “higher learning” (pardon the exaggeration) had proven that there are depths of ignorance in academia today that can’t be charted.

Make no mistake. This isn’t your father’s campus radicalism. The sight of placards, bullhorns, and upraised fists might lead some to believe that it’s animated by the spirit of protest that blew across campuses in the late 1960s. But there’s a crucial difference.

Then, we witnessed students trying to be heard. Right or wrong, they were expressing a point of view. It was messy, but it was debate. Now, however, we’re dealing with something dangerous: students trying to silence their critics. They want to muzzle those who disagree with them. They demand “safe spaces” where they can be protected from opinions that—horror of horrors—differ from theirs.

And even more disturbingly, they resort to physical intimidation and even violence against those who try to say what they don’t want to hear.

Sadly enough, it works. The sight of university officials caving in, amid a stream of obsequious apologies, is a familiar one. Worse, no proof of the accusations (if it even exists) is needed. If you’re accused of not doing enough to eradicate racism—if, for example, you express regret or you grovel—then you step down anyway, because the kids want a scalp or two.

No wonder some critics label these student protesters “crybullies.” Some will literally cry, their oh-so-sensitive psyches damaged by exposure to a different opinion, then angrily demand that their environment be rearranged to protect them from “hate speech”—defined as any speech that doesn’t perfectly align with what they already believe.

As a result, critical thinking becomes a rare skill. Debate disappears. Far from having their intellects sharpened by exposure to a variety of viewpoints and philosophies (the presumptive point of a college education), students are indoctrinated—fed a politically correct worldview that brooks no dissent.

In such an environment, the very notion of free speech is meaningless. The liberties purchased through the blood and sweat of countless Americans, from Valley Forge through the Battle of the Bulge, begin to atrophy, sacrificed for the dubious consolation prize of “safe spaces.”

Thus, we raise a generation ignorant of its great birthright of freedom. We become easy prey for terrorist brutes whose mission is to destroy us. If innocent people are murdered by barbarians who are targeting us as well, we pout and whine at how inconvenient it all is.

“Freedom is never more than one generation away from extinction,” President Reagan once said. “We didn’t pass it on to our children in the bloodstream. It must be fought for, protected, and handed on for them to do the same, or one day we will spend our sunset years telling our children and our children’s children what it was once like in the United States where men were free.”

That won’t happen unless we speak up, even at the risk of offending the crybullies.