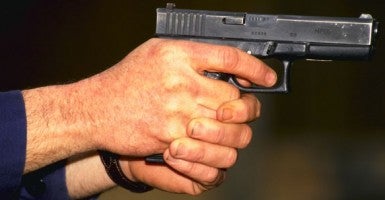 The family of a Georgia teenager is suing the Waycross, Ga., Police Department for $12.5 million after a police officer allegedly pointed a gun to their son’s head and handcuffed him on the ground—all for a seatbelt violation.

The incident occurred on Jan. 18 when high school senior Montre’ Merritt was returning home and pulling into his driveway. Officer Cory Gay had been following Merritt for several blocks, but turned on his flashing lights when they neared Merritt’s house.

Instead of conducting a normal stop, however, Gay approached the vehicle, pointed a gun to Merritt’s head and forced him to lie on the ground. Despite Merritt’s insistence that he had done nothing wrong, Gay called for backup and handcuffed the teenager—while his mother watched in horror.

When backup arrived, Gay released Merritt and cited him for a seatbelt violation. No explanation was given to Merritt or his mother about why such force was used.

Merritt recalled the emotional shock he experienced from the encounter:

Coming from me being a huge role model in my community, to see my mom witness that. That was one of the most painful things I could ever imagine for her. The pain that I still feel. The tears that I still cry. Everything is just real in reality. I have to wake up with this on my heart and on my mind every day, and it hurts.

As a result of this incident, Gay was suspended without pay for five days after the Waycross police chief determined the use of force was unjustified. Gay was subsequently required to attend use-of-force training.

But the Merritt family asserts the extra training is not enough.

Their lawsuit claims Gay falsely arrested Merritt, intentionally inflicted emotional distress on him, assaulted him and deprived him of his civil rights. Additionally, the lawsuit claims the city of Waycross and the Waycross Police Department were negligent for not properly training Gay.

They also claim the incident was racially motivated.

The allegations about Gay’s behavior, if true, raise some troubling questions. What possible purpose was served by ordering Merritt to lie on the ground while pointing a gun to his head? There is no indication Merritt was behaving in a threatening manner. The Waycross Police Department took the right steps by recognizing that this was over the top and disciplined the officer.

Stories like this bring to mind other instances of inappropriate police overreaction:

In this case, whether Gay’s decision to point a gun at Merritt was based upon racial prejudice or was simply the result of a lack of training, it is undisputed that a serious error took place, largely due to poor judgment by the officer.

Warren E. Burger, former chief justice of the United States, wisely once remarked, “The policeman on the beat or in the patrol car makes more decisions and exercises broader discretion affecting the daily lives of people every day and to a greater extent, in many respects, than a judge will ordinarily exercise in a week.”

It is this authority which requires equal amounts of training and judgment for the public to truly have faith in their officials. Powerful discretion over the lives of average citizens should be exercised with wisdom. Not every situation calls for the use of force, and not every confrontation deserves to be escalated into a criminal arrest.

If police officers wish to uphold their oath to “protect and serve” then serious examination is required of the policies and procedures that lead to incidents like this.