A Second Health Care Worker has Ebola. It’s Time for the Government to Prove It Can Handle This. 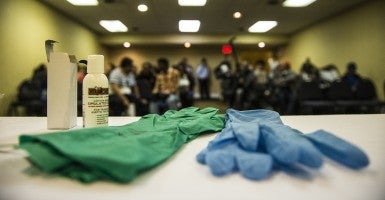 A team of volunteers help train airport workers how to avoid contamination from possible exposure of the Ebola virus in a hotel basement near LaGuardia Airport Thursday afternoon. (Photo: Robert Stolarik/Newscom)

Concerns over the U.S. response to Ebola heightened when medical officials confirmed that a second individual involved with delivering treatment to the original Ebola patient contracted the disease. Getting treatment procedure right is absolutely vital.

It’s critical for reassuring the American people public officials have the ways and means necessary to prevent an outbreak of the deadly disease in the United States. So it’s understandable why Americans are concerned that someone who was supposed to be protected from contagion while providing treatment wasn’t, in fact, protected.

Ebola is a deadly disease and requires a serious, effective response. Americans must have confidence in the response that local, state and federal direct in a public health emergency. The same instruments employed during a public health emergency are used for disaster response and terrorist incidents as well as other public safety emergencies and disease outbreak, epidemic and pandemic response.

As Americans grapple with the news from Dallas of the second healthcare worker infected, there are some vital issues that must be addressed. Understanding how the health workers became infected and preventing disease transmission to health workers is essential to an effective response. Clearly, something went wrong. After all, Ebola patients have been successfully treated in the U.S. before without any of the individuals caring for them becoming infected.

On the other hand, medical professionals operating in West Africa, trained in dealing with the disease, have contracted Ebola. Clearly, if effective procedures are not implemented and scrupulously followed, medical personnel treating a symptomatic victim will be at risk. The top priority must be ensuring that the right treatment protocols are put in place and that those delivering treatment are scrupulously following appropriate procedures.

Further, there must be clear procedures to contact, monitor and test individuals who may have been exposed to an infected individual, as well as decontaminate potentially affected areas with appropriate speed, efficiency and effectiveness. These steps are vital to preventing a disease outbreak.

Finally, as long as the potential of the disease to be transmitted outside the outbreak areas in West Africa remains, pubic health and emergency response officials across the nation must know how to effectively respond to potential cases. The administration–and state and local officials–have a long to-do list to reassure Americans that the rights step to prevent an outbreak are being taken.

This is not just a task for responding to Ebola. In all matters of public safety, disaster response and responding to terrorist threats,the competency of government officials is an important part of the response. That trust must be earned.