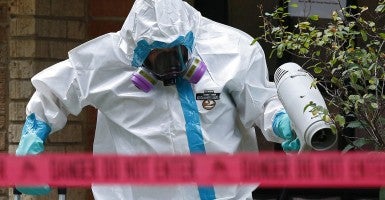 A hazmat crew cleans outside the apartment where a health care worker at Texas Health Presbyterian Hospital lives and tested positive for Ebola, in Dallas Oct. 11. (Photo: Newscom)

Ebola’s devastating impact throughout West Africa—along with several cases in Europe and the United States—has garnered global attention, but the affected countries are now suffering from a hidden impact of the outbreak. Non-Ebola deaths are skyrocketing in West Africa because of the increased strain on an already weak medical and emergency response capability.

According to the Centers for Disease Control and Prevention an estimated 8,000 people have contracted the virus and nearly 4,500 deathshave been reported in Guinea, Sierra Leone and Liberia. The number of Ebola cases, likewise, is expected to double every three weeks, according to the World Health Organization.

In an effort to get ahead of the outbreak in West Africa, the United States is deploying 3,000–4,000 troops. Yet the overall international response has been slow and weak. The emergency deployment of U.S. personnel to the region has been stalled in part because of infrastructure challenges on the ground.

For months the affected governments and international NGOs such as Doctors Without Borders (Médecins Sans Frontières Internationalor MSF) attempted to get a handle on the outbreak. But the situation spiraled out of control, and previously fragile political situations become even more volatile.

It was not long ago that war was ravaging several of the affected countries. A civil war in Liberia lasted from 1989 to 1997 and resumed from 1999 to 2003. That conflict, along with the related 11-year conflict in Sierra Leone, which claimed the lives of an estimated 200,000 people, has taken a serious toll on the societies and their ability to respond to emergencies. Many fear that if the outbreak is not controlled, political instability once again could plague the region.

Controlling the Ebola outbreak and caring for those with the disease are national health priorities in the affected countries. But because of limited resources and a shortage of health workers, there are concerns basic healthcare services will become more limited for those with other medical conditions, such as pregnancy, HIV/AIDS, malaria and tuberculosis.

The situation is particularly dire in Liberia, where the healthcare system has been described as “collapsing” with hospitals closing and medical staff leaving the country. Afraid of contracting Ebola, people increasingly refuse to seek treatment at medical facilities and are dying of common diseases.

“Lots of people who don’t have Ebola are dying, said President Ellen Johnson Sirleaf of Liberia said last month during a conference on the Ebola crisis at Georgetown University. “They are dying because they don’t have access to hospitals or a doctor center because those facilities are closed.”

The limits of public health in Liberia, Guinea and Sierra Leone underscore why an expeditious emergency response that can scale quickly to meet the affected countries’ needs—mainly hospital beds and trained health workers—is critical to controlling the outbreak. The sooner Ebola is controlled in West Africa, the safer the rest of the world will be, including the United States.

The United States and a handful of other countries have made serious commitments to combatting Ebola in West Africa, yet the response has been near silence in capitals throughout Africa. Many brave Africans work for international organizations helping to address the situation, yet African governments have been slow to make commitments. Hopefully this will change as the U.S. becomes more involved and provides necessary support.

Cooperation will be necessary among international partners and Ebola outbreak-affected countries (along with African countries not currently affected) for what will be a long-term crisis, with lasting economic and social consequences, if the disease is to be overcome in West Africa.