‘We Have a Place in This World’: Hong Kong-Born Merchant Stays Connected to Freedom Fight 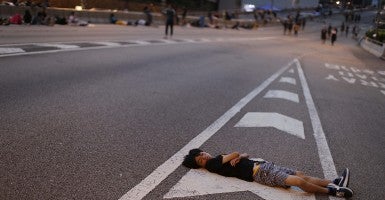 But before China had a chance to fail to deliver the “two systems” part of that slogan, some Hong Kong residents left for brighter places, fearful of being overshadowed by Beijing’s cloud.

A week after Hong Kong erupted into pro-democracy protests, The Daily Signal spoke to a businessman who has the perspective of a Hong Kongese yet lives as an outsider, enjoying freedoms he couldn’t get in the city that bred him.

The people of Hong Kong, he says, are connected by a sense that “we have a place in this world.”

The businessman, who asked to be identified only by his last name, Chan, was 10 when his family fled Hong Kong in search of freedom in Canada.

“I am not pro-Hong Kong or pro-Beijing, so this is a very unique, subjective perspective,” Chan told The Daily Signal. “The discontent has always been bubbling. That’s the reason why we left Hong Kong.”

Before 1997 there was a worry something like this could happen. It was the major reason the majority of people left Hong Kong. They foresaw in the future that Hong Kong would lose it’s democracy rights and just be absorbed by China as another Chinese city.

Chan, 33, who still lives in Vancouver, British Columbia, is a partner in a Hong Kong-based textile company that does business in China.

He says he has more than 30 friends who are participants in the demonstrations, which entered a new phase Friday when opponents of the protest movement assaulted protest sites, tearing down encampments and attacking demonstrators. A display in support of the Hong Kong democracy protests sprouted on the walls of Hong Kong House in the central business district in Sydney, Australia. (Photo: Tasso Taraboulsi/Newscom)

Hong Kong, a city of 7.2 million, returned to Chinese sovereignty in 1997 after more than 150 years of British rule.

The city maintains an independent judiciary, and residents enjoy greater civil liberties than residents of mainland China. It has a strong tradition of free speech.

But under China President Xi Jinping, Beijing has reined in those freedoms, imposing a measure proposed last month that would limit voting reforms.

>>> Commentary: Will Hong Kong Be Scene of Next Tiananmen Square?

Demonstrators have demanded that current city leader Leung Chun-ying resign and that his successors be elected democratically, without prior vetting of candidates by Beijing.

“Within the protesters, there are mixed groups, doctrines and agendas,” Chan said.

Some are anti-China and anti-government. They are directly protesting to the China government. Others just feel their democracy is being stripped away and want a chance to vote in the leadership of Hong Kong.  We’ve been waiting and waiting for that, and then the announcement is totally different.

Chan says his family anticipated that Beijing would struggle to cede democratic power to Hong Kong, especially as the city evolved and began to live out basic freedoms granted by its mini-constitution, the Basic Law.

Chan’s parents, uncles, aunts and cousins all emigrated to Canada, and he no longer carries Hong Kong identification. But his business operates out of Hong Kong and many in his large, extended family still live there.

He remains deeply in sync with the Hong Kong story — how the city rose to become a sophisticated financial center with one of the world’s highest gross domestic products per capita.

We are very connected with other countries and we think very highly of ourselves. We have a good understanding of international policies. We are educated. We think we are important. We think we have a place in this world. … But when China looks at us, they see a dingy, little, small city that not a lot of people care about. That’s what the fight is all about.