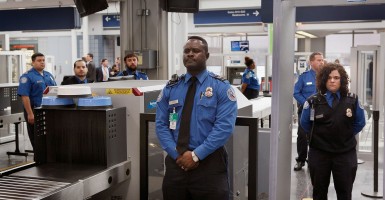 SFB just joined the TSA’s Screening Partnership Program (SPP) that allows airports to replace TSA screeners with more flexible and cost-effective screening services provided by private companies and overseen by the TSA. While this may seem strange to many Americans who have grown accustomed to TSA-manned checkpoints, it really isn’t abnormal for airports to manage their own security with government regulation and oversight. After all, most European airports are run this way, and now 19 airports in the U.S. are as well.

The main benefits of the SPP are enhanced productivity and lower costs, while maintaining equal or greater levels of security. How can this be? One major reason is that the private sector can be far more efficient and flexible in hiring and training employees than the government, reducing employee turnover, increasing productivity, and lowering personnel costs even though salaries and benefits are identical to TSA agents. A study by the House Committee on Transportation and Infrastructure found that taxpayers could save “$1 billion over five years if the Nation’s top 35 airports operated as efficiently as [San Francisco International Airport] does under the SPP model.”

With TSA managers still overseeing screening operations at SPP airports, security is not endangered. In fact, when the workforce is better managed under the SPP, other benefits including better security and better customer service, naturally follow.

The TSA, however, has been loath to get out of frontline screening. The TSA started rejecting all requests for SPP expansion in 2011 until Congress acted in 2012 to reverse the TSA. The TSA has been slow to approve SPP requests as it has held that the SPP is actually more expensive, even though various government and nongovernment studies have criticized its findings.

As SFB joins the list of SPP-administered airports, the TSA should do more to get out of the personnel management game and return its focus to overseeing security at U.S. airports. The existing SPP framework should be reformed to allow more airports to easily join SPP and to choose their own contractors from a list of TSA-approved screeners.

The SPP offers better, more efficient, and friendlier screening for less money. SFB and 18 other airports are reaping these benefits—isn’t it about time the SPP came to the airport nearest you?